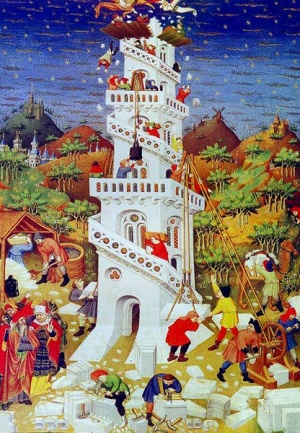 The Lord confounds the languages of all the Earth

This page is divided in two main sections, one in English, to open the discussion to the wider Wikimedia community, and another in Portuguese (Português), for those who lack enough command of the English language to participate in the broader discussion. Vapmachado 05:05, 25 March 2010 (UTC)

Behold, the people is one, and they have all one language; and this they begin to do: and now nothing will be restrained from them, which they have imagined to do. Genesis 11:6

Do as I say

All of the above no referenced or poorly referenced Portuguese "dialects" gave me reason to pause. In my memory, going back some fifty years, there is no recollection of such potpourri of dialects. All I could find there were accents, regionalisms and the Mirandese dialect. All these seemed to have suffered from a recent "upgrade." Given the expertise of the average wikipedian on every subject on the surface of the Earth, not counting their most refined qualities, and such a lack of evidence, it all started sounding like baloney. No matter how thin some people were trying to slice the Portuguese language, it was all baloney. A lot of phony baloney.

I have absolutely no expertise in linguistics, but being blocked on three other projects (full disclosure) entitles me to give my version of the story as much as anybody else. One parenthesis to give my warmest thanks to my good friends who have been so diligent in displaying public information about me, while at the same time showing such false modesty about my meager efforts to do the same about the almighty powerful. Still, I have not reached even close to the inspired level of one of my more dedicate admirers and followers (wish see [3] vis-à-vis [4] , [5], [6], and [7]). A true delight. But I digress, as usual. Let's get to the story as told by yours truly.

Modern Portuguese spans a period from the 16th century to the present day. Its beginning is marked by the publication of the Cancioneiro Geral by Garcia de Resende, in 1516. "The land now called Brazil [...], was claimed by Portugal in April 1500, on the arrival of the Portuguese fleet commanded by Pedro Álvares Cabral. The Portuguese encountered stone age natives divided into several tribes, most of whom shared the same Tupi-Guarani linguistic family, and fought among themselves. Colonization was effectively begun in 1534 [...]" Therefore, in 1516 and for sometime thereafter, there was no Brazilian Portuguese dialect(s), accents or regionalisms of any kind.

One hundred years ago (1910), next October 5, Portugal became a Republic. Among the many changes introduced by the Republic, one of them was the Orthographic Reform of 1911. In 1915, the Academia Brasileira de Letras accepted a proposal making the Portuguese orthography of 1911, official in Brazil too. Four years later, in 1919, the same academy reneged on the proposal and abolish the 1915 resolution.

Portugal is now a country with a population of some 10 million. Brazil has twenty times more people (about 200 million) and growing, an immense territory (more then 90 times larger than Portugal), untold natural resources, and is one of the ten largest economies in the world. Using a post-colonial language may sound unflattering, and make a lot of people uncomfortable and unhappy. It's only natural that there will be some desired to be "the" country where Portuguese is spoken, while everybody else speaks a dialect. Some Americans and British will recognized the problem. History can be revised and rewritten, but it may take a long time or the task might never be finished. I don't think I'll be around to find out.

In 2001, the Dicionário da língua portuguesa contemporânea of the Academia das Ciências de Lisboa was published. Its publication was preceded and followed by many criticisms and controversies. It sets the orthography and phonetic standards of contemporary Portuguese language as written and spoken in Portugal. It includes words used in Brazil, African and Asian countries that have Portuguese as their official language.

Since then a much greater controversy has been born out of the Orthographic Agreement of 1990. There's even been some awkward attempts to shove it down the throat of the Portuguese, like the one on the Portuguese Wikipedia, led by a 45 year old sysop with an undergraduate degree in History and a master in Public Relations and Business Communication. In comparison, I have much better qualifications on the subject: I have been speaking and writing Portuguese for 15 years more than him. (Full disclosure: He was a member of the Arbitration Committee whose decision set the stage for my greatest admirer to have an excuse to ban me from the Portuguese Wikipedia for infinity. He was also instrumental in condoning the sordid entrapment that led to my first ever block, requested by a user suffering from emotional instability, while I was trying to do some work for the utmost benefit of the Portuguese Wikipedia.)

All the bets are off on how this imbroglio will end. One thing is certain, in the school year of 2010 / 11, nobody is teaching the children in the schools of Angola, Mozambique and Portugal to write or talk using a standard different from the one published by the Academia das Ciências de Lisboa in the Dicionário da língua portuguesa contemporânea.

Dialects or accents? The question remains unanswered. So, I did what most people do: I searched Google. The results are shown in Table 1, below. The first column starts with all the far fetched, no referenced or poorly referenced Portuguese "dialects", that you'll find above in the English Wikipedia articles. A list of my own follows, based on my recollections and familiar names of regions, major cities in those and other regions. Both list include the regions where my ancestors and parents came from, my father's home town, school mates in Portugal and Mozambique, and my own birthplace and hometown. Last, but not least, it lists Brazilian, with which only the rare Portuguese might be unfamiliar. The next three columns list the number of occurences for searches made for "Sotaque …", "Dialecto …" (as it is written in Portugal), and "Dialeto …" (Brazil), with the ellipses (three dots) replaced by the word(s) on the first column. There are such striking differences in the results obtained, that I'm going to let you all comment them yourselves. I'll be glad to join any engaging and reasonably polite dialog.

To make the effect of selecting pt or pt-BR more accessible to a general audience, there is a need for a better explanation of the resulting differences.