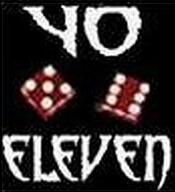 The unofficial logo of the Club

The Eleven Eleven Club is an informally-organized fraternal association, dedicated to placing a roulette wager on the number 11 at the eleventh minute after the eleventh hour on November 11th each year. Since its founding in 1993, the club's bet at the appointed hour has been unsuccessful in every try except the year 2000, when a communal wager of $99 at the Showboat casino in Atlantic City, NJ, saw the number 11 hit, and the nine contributing bettors walked away with a Saturday night payout of $3,465 ($385 for each player).

While historically the club has existed for entertainment purposes only, it has recently taken up fundraising for charitable causes in an effort to reinvigorate the participating membership base.[1] Through raffles leading up to a drawing on 2006-11-11, the club generated in excess of $250, which was donated to the Bournelyf Special Camp in West Chester, Pennsylvania.

Also integral to the Eleven Eleven Club experience is a membership dinner party preceeding the 11:11 PM bet. For a number of years, the festivities were held at Angeloni's II Restaurant and Lounge; however, in 2006 an eBay charity auction was held to determine a sponsor for the dinner. That auction was won by the Wonder Bar and an enjoyable dinner was had in their Sunset Room.

Incidentally, Angeloni's II did not enter a bid, because their host said they don't really "do the Internet thing". The Wonder Bar won the auction for only $11, but was kind enough to add another $50 donation to the charitable cause. Being that the club spent over $525 on drinks and dinner, The Wonder Bar obviously made a prudent bid to win the club's business.

The club was initially comprised of a hardcore cadre of avid gamblers who could be counted on one hand. The club grew to comprise over the years an assembly of about 25 different friends and family members who have participated in the annual trek to Atlantic City. As individuals married and more and more children entered the family scene, the club's participation rate has dropped. The turnout in 2005 was only five souls.

That drought inspired the Eleven Eleven Club to look outside its ranks for a complementary source of energy and a new motivation for its mission. The 2006 trip to Atlantic City was punctuated by a charity fundraiser. The club sold raffle tickets to supporters and attendees, who were awarded prizes donated by both individual contributors and organizations such as MyWikiBiz. One half of the raffle proceeds plus the Wonder Bar's donation were set aside directly for the charity -- a church-affiliated summer camp for children and teens with special needs. The other half of the raffle income was spirited off to Showboat Casino to be wagered on a roulette wheel at exactly 11:22 PM (after the club’s dogmatic 11:11 PM bet). All of the winning proceeds from that bet would have been added to the "set aside" donation to the charitable organization. The roulette area's pit boss was very much supportive of the club's ambition, and he even suspended action on the wheel for a couple of minutes prior to 11:11 PM, so that the club's bet could be assured correct timing. But, alas, at the very moment of the spin, a wicked badger of a cocktail waitress ruined the night's karma by barging into the group and shouting, "People, puh-lease, who ordered these Captain and Cokes?!", and both the 11:11 and the 11:22 bets were unprofitable.

The Eleven Eleven Club was encouraged by the turnout of 16 participants in 2006, about half of whom were first-timers in the experience. There has been some talk of organizing more officially as a 501(c)(7) recreational club. Furthermore, given the success of the Wonder Bar sponsorship along with complimentary discounted lodging provided by Showboat, the club intends to more aggressively pursue corporate co-sponsors for various aspects of future engagements. It is estimated that over the years the club's activity has accounted for upwards of $25,000 to the Atlantic City economy, in terms of transportation, lodging, dining, and gaming.

Please see our page dedicated to the 2011 Triple Eleven event.