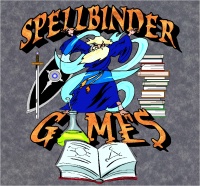 Spellbinder's company slogan is, "Your newest weapon in the war against reality'."

Spellbinder Games emerged from Spellbinder Books, a book seller and publisher which produced a trilogy of homebrew fantasy fiction novels in the 1980s -- The Persnackety Dragon, The Dimadon Lantern, and My Magical Maguffin, as well as a coloring book called Fantasmagoria -- which were never distributed professionally. Along with the Spellbinder Books store, all original records of the books were lost to Hurricane Katrina in 2005.

In the spring of 2005, Apotheosis Publishing purchased Spellbinder Books, and a games division, Spellbinder Games, was launched. Thanks to emergency relocation into an empty uptown New Orleans rental property (owned by the Dreadmire author's brother), the company was able to publish its first RPG supplement, Dreadmire on December 23 of that year[1], which was released in February 2006. Once distribution began, Spellbinder Games moved from its temporary New Orleans property and relocated to Baton Rouge, Louisiana in early 2006. In mid 2007, Apotheosis Publishing sold Spellbinder Games to a consortium of authors, which included Randy Richards, for an undisclosed sum.

Randy Richards was placed on staff as Project Director. Mark Williams remained available as a consultant.