Randy Richards is a game designer and author of Dungeons & Dragons adventures and articles. His first published article, "Dark Magic in New Orleans"[1] appeared in Dungeon magazine issue #71 in 1998; his book, Dreadmire (ISBN 0977338339) a campaign setting for the d20 rules system, was published by Spellbinder Games in 2005 and released in 2006.

Randy Richards originally hails from Chalmette, Louisiana, the actual location of the "Battle of New Orleans". He currently lives in Baton Rouge, Louisiana, where he runs a photography business and writes professionaly. 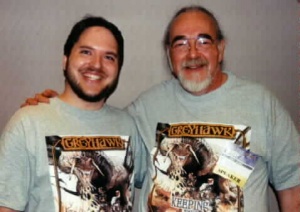 Randy Richards has been playing Dungeons & Dragons since the late 70s, but started in earnest in the early 80s. "In the 1980s," Randy says, "we had the Basic D&D boxed game in our Gifted & Talented class, and I used to play a Cajun halfling. The other kids loved it, especially the accent." Randy graduated from Chalmette High School in 1984, then from college in 1989, and moved to Tennessee. The move proved to be beneficial for Randy's career in photography. "People know me for my writing," he says, "but they don't know my day job is photography. Olan Mills, which operates out of Chattanooga, hired me to work for them as a kids photographer, then a glamour photographer, and finally a church directory photographer."

After five years in Tennessee, Randy was transferred to Baton Rouge, Louisiana, and started a family. "Thats when I first got published. I wrote "Dark Magic in New Orleans" for Dungeon Magazine. After receiving scores of complimentary letters from people all over the world, I decided to start writing on a regular basis. With all my traveling with work there really wasn't time, but while driving I would make notes on anything available: cardboard boxes, gum wrappers, paper cups -- anything!"

In the late 90s Randy hosted a series of Gen Con events, one of which included the co-creators of D&D, Gary Gygax and Dave Arneson, and other big names including Frank Mentzer, Lisa Stevens (later CEO of Paizo Publishing), and Anne Brown. "This got my name known in the industry, although at the time that wasn't my goal. I was just trying to have fun and spread the joy of gaming."

A few years later, Randy got the idea to write a book. "My daughter was getting older, and I wanted to have more time for her, so I decided to start my own photography business. The icing on the cake is that I had more time available for writing. I would copy the scrap notes down when I got home, and as I was reading through them I realized they started to form a swamp theme. That's when I started writing Dreadmire."

There were some false starts and delays before Dreadmire came to print. "First I submitted it to Necromancer Games, but we had creative differences and parted ways. Later... I was contacted by Spellbinder Games. They gave me a lot of control over the project. After my other experiences that was very important to me."

Richards is active in the gaming industry, giving seminars and hosting panel discussions at various conventions. Common topics of his seminars have included the Random Fandom Trivia Challenge, How to Get Happily Published, Science vs. Magic, Geek Chic, World of Greyhawk, The Dreadmire Chronicles, Animal Superpowers, The Future of Gaming, DramaCon, The Death of Dungeons & Dragons, and other gaming industry subjects. 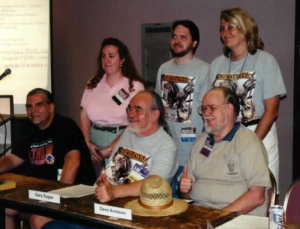 Richards is also the former editor of the Greyhawk Grimoire, an online publication devoted to the World of Greyhawk campaign setting; and is the founder of the World of Greyhawk Fan Club, which once claimed to be "the largest Greyhawk fan organization in the world." The organization claimed among its members such luminaries as Gary Gygax, Dave Arneson, Rob Kuntz, Frank Mentzer, Len Lakofka and Jim Ward. In 1998 Randy sponsored the "Celebrity Greyhawk Dinner" and "Greyhawk Celebrity Panel Seminar." He has written numerous online fan-fiction adventures set in the Greyhawk campaign setting, including "Slerotin's Tunnel" and "Suel Imperium: Age of Glory".

In early 2006, Randy Richards was the subject of an interview[2] for Gloomwing Magazine, a gaming, art and short fiction periodical.

In February of 2009, a gaming/sci-fi interview with Randy Richards appeared in InRegister Magazine[3] on page 20. A small photo was also included on the index page.

In January of 2009, the Metro section of the Advocate newspaper featured a photo[4] and caption of Randy Richards at a science fiction meeting.

In April of 2008, Randy Richards was selected as "Business Person of the Month" by the Baton Rouge, Louisiana library system[5].

Randy Richards' Hurricane Katrina photographs are part of the Louisiana Bucket Brigade's[6] "Life in the Wake of Katrina" tour[7].

In 2006 Randy Richards won a third place award in the Adult Landscape category of the LUMCON Bayous of Louisiana photography contest.[8]

Randy Richards has appeared on local TV newscasts[10] for his photojournalism after Katrina, and in a TV commercial for Cox Cable (see below).