Previously a weekly columnist with Sun Media, she has contributed to publications such as the New York Post, London Telegraph online, Washington Times/United Press International, Newsmax Media, and The Vancouver Sun. Marsden has also written a twice-weekly political column for the National Post – one of Canada’s two national newspapers - with one weekly column about national/international politics, and the other about Toronto/Ontario affairs.

Born in Vancouver, Canada, Marsden was raised in the birthplace of political talk-radio, where she grew up listening to Jack Webster and watching Liberal Canadian Prime Minister, Pierre Trudeau, flip people off. She still holds several major records in competitive swimming from her days as an international level competitor.

The fully bilingual former print and runway model was schooled almost exclusively in French until high school. She graduated with a Bachelor of Science degree from Simon Fraser University on a full academic scholarship before pursuing graduate studies in law and criminology, a journalism degree at the British Columbia Institute of Technology, then political journalism at the National Journalism Center in Washington, DC. For her academic achievements, she was awarded the Canadian Governor General’s medal for academic excellence.

During her college years and prior to her media career, Marsden worked as a mall Santa photographer, a lifeguard, an aerobics instructor, a swimming coach, an income tax return error inspector, and a temp at various businesses ranging from an investment bank and law firms to a parking ticket company and a corrugated box manufacturer. She has volunteered with the Special Olympics, World Transplant Games, Canadian Blood Services, Red Cross, Terry Fox Foundation, SHARE Society, and many other organizations.

After working as a producer, anchor, camerawoman, and reporter for a cable news outlet in her hometown, and as a videographer for Rugby Canada and BC Rugby, her first major media position was with ABC News’ 20/20 in New York City, where she apprenticed under Connie Chung. After an apprenticeship in talk-radio at the Radio America Network in Washington, DC, Marsden was hired as Director of a DC-based conservative think-tank that was a key component of President George W. Bush’s beltway coalition during the lead-up to the Iraq War. 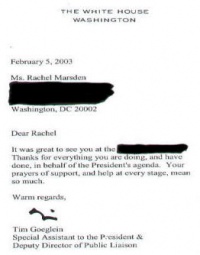 She returned to her native Canada to work as an operative on two simultaneous federal campaigns for current Prime Minister Stephen Harper’s Conservative Party in the province of British Columbia, specializing in communications strategy and opposition intelligence. At the same time, she began contributing to United Press International (UPI), and hosting a call-in talk-radio show in Vancouver, BC, where she interviewed and debated guests ranging from Canada’s then Deputy Prime Minister, Sheila Copps, and current International Trade Minister, Stockwell Day, to Ann Coulter and Watergate figure G. Gordon Liddy of the Richard Nixon administration.

It was this hour-long interview with Liddy – in which he talked in-depth about his role in Watergate and the scandal’s aftermath – that caught the attention of David Asper, the Executive Vice-President of the CanWest Global media empire, who offered her a Toronto-based political columnist position at the National Post, in conjunction with then publisher, Lester Pyette.

Having quickly established a unique, controversial, populist conservative voice in the Canadian media, she switched to a regular column in the Sun Media chain, and started her own public relations and communications company on Toronto’s Bay Street.

While based in Toronto, Marsden started out with the Fox News Channel in 2004 as the Canadian Correspondent for The O'Reilly Factor -- the top-rated cable news show in the world -- after she was spotted as a regular panelist on Dennis Miller's CNBC show in Los Angeles. She was recruited by Rupert Murdoch’s chief lieutenant and former Ronald Reagan communications strategist, Fox News CEO Roger Ailes, who personally selected her to be the only conservative on a daily national talk show with three other male co-hosts.

After several months, Marsden left the show when it underwent a format change, stating, “The show has drastically changed direction since its inception and apparently no longer has a place for a political pundit.” She has since appeared on Fox Business.

Marsden has since returned to her entrepreneurial roots, picking and choosing interviews, appearances and projects, and working with various television and radio networks as a free-agent. She continues to work as a political operative, opposition intelligence ("oppo") researcher, political and communications strategist, and media consultant with a worldwide public and private sector client base. With the growth of her international clientele, she relocated her operations base to Paris in 2009. 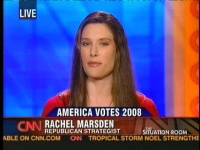 She speaks on Capitol Hill and elsewhere on topics such as national and international politics; the impact of current political events on business; political strategies applied to business; crisis management; the war on terrorism; national security; leveraging media and public relations in business; media and technology; politics and technology; election analysis; the cultural and economic impact of immigration; and various other public policy issues.