Latitude, usually denoted symbolically by the Greek letter phi, \(\phi\,\!\), gives the location of a place on Earth north or south of the Equator. Latitude is an angular measurement in degrees (marked with °) ranging from 0° at the Equator to 90° at the poles (90° N for the North Pole or 90° S for the South Pole). The complementary angle of a latitude is called the colatitude.

All locations of a given latitude are collectively referred to as a circle of latitude or line of latitude or parallel, because they are coplanar, and all such planes are parallel to the Equator. Lines of latitude other than the Equator are approximately small circles on the surface of the Earth; they are not geodesics since the shortest route between two points at the same latitude involves moving farther away from, then towards, the equator (see great circle).

A specific latitude may then be combined with a specific longitude to give a precise position on the Earth's surface (see satellite navigation system).

Four lines of latitude are named because of the role they play in the geometrical relationship with the Earth and the Sun:

Only at latitudes between the Tropics is it possible for the sun to be at the zenith. Only north of the Arctic Circle or south of the Antarctic Circle is the midnight sun possible.

The reason that these lines have the values that they do lies in the axial tilt of the Earth with respect to the sun, which is 23° 26′ 22″.

Each degree of latitude is further sub-divided into 60 minutes. One minute of latitude is one nautical mile, defined exactly as 1852 metres (this is approximate due to slight variation with latitude (at sea level) and is because the earth is slightly oblate). One minute of latitude can be further divided into 60 seconds. A latitude is thus specified as 13°19′43″ N. For high accuracy, the seconds are specified with a decimal fraction. An alternative representation uses degrees and minutes, where parts of a minute are expressed as a decimal fraction, thus: 13°19.717′ N. Degrees expressed as a decimal number (decimal degree notation) is more often used: 13.32861° N. Sometimes, the north/south suffix is replaced by a negative sign for south (−90° for the South Pole).

A region's latitude has a great effect on its climate and weather (see Effect of sun angle on climate). Latitude more loosely determines tendencies in polar auroras, prevailing winds, and other physical characteristics of geographic locations.

Because the Earth is slightly flattened by its rotation, cartographers refer to a variety of auxiliary latitudes to precisely adapt spherical projections according to their purpose.
More generally, for other planets such as Mars, geographic and geocentric latitude are called "planetographic" and "planetocentric" latitude, respectively. Most maps of Mars since 2002 use planetocentric coordinates.

The expressions following assume elliptical polar sections with the angular eccentricity, \(o\!\varepsilon\,\!\) (which equals \({}^{\arccos(\frac{b}{a})}\,\!\), where \(a\;\!\) and \(b\;\!\) are the equatorial and polar radii), and that all sections parallel to the equatorial plane are circular. Geographic latitude (with longitude) then provides a Gauss map.

The following plot shows the differences between the types of latitude. The data used is found in the table following the plot. Please note that the values in the table are in minutes, not degrees, and the plot reflects this as well. Also note that the conformal symbols are hidden behind the geocentric due to being very close in value. 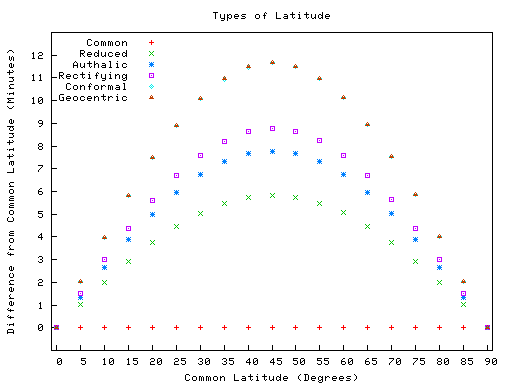 It is frequently observed that there is a distinct correlation between latitude and the wealth of nations. The continents along the equator, Africa and South America, are the poorest. Even within Africa and South America this can be seen as the nations farthest from the equator are wealthier. In Africa the wealthiest nations are the three on the southern tip of the continent, South Africa, Botswana, and Namibia, and the countries of North Africa. Similarly in Latin America Argentina, Chile and Uruguay have long been the wealthiest. Within Asia, Indonesia, located on the equator, is among the poorest. The wealthiest nations of the world with the highest standard of living tend to be those at the northern extreme of areas open to human habitation, Canada, and the Nordic Countries. Within the wealthy continents, and even within large countries wealth increases with distance from the equator. Southern Europe has long been poorer as has the Southern United States.

There have been a number of explanations for this phenomenon. The first to describe and try to assess it was the French philosophe Montesquieu who proposed that cold weather means less blood in the extremities, which makes the flesh less elastic; this gives northerners more strength and makes them less able to relax. This forcing of the blood inward, according to Montesquieu also means more flows through the heart, increasing vitality. These findings have been wholly discredited by modern science.

There are also exceptions, for example, Russia is less well off than United States, or even Australia; the latter country is wealthier than Southern Europe. Also, within Russia, Moscow and especially St. Petersburg are wealthier than, for example, Siberia. Of course, Saudi Arabia, Kuwait, the United Arab Emirates, and Brunei, have astounding concentrations of wealth, thanks to petroleum. Similarly, Germany's poorest regions are situated in the North East, and in general, the south of the UK is wealthier than the north.

One controversial explanation currently being advocated by certain evolutionary psychologists, is claimed to be grounded in evolutionary theory. Some have argued that as humans migrated into higher latitudes and encountered colder weather there, the cold weather forced the evolution of higher group intelligence by forcing inhabitants to perform more intellectually demanding tasks, such as building shelter, fires, and clothing, in order to survive (Lynn, 1991).

One study that supports this notion was performed by Beals et al. (1984, p. 309), who found a correlation of 0.62 (p=0.00001) between latitude and cranial capacity in samples worldwide and reported that each degree of latitude was associated with an increase of 2.5 cm³ in cranial volume.

Researchers such as psychologist J. Philippe Rushton have argued that the association of greater brain size with greater latitude is due to the fact that cold weather imposes on its inhabitants more cognitively demanding tasks such as the need to construct shelter, make clothing, and store food.

Nevertheless, these explanations seem to be contradicted by the fact that it was in Africa, at near equatorial latitude, that harsh conditions such as extreme drought have brought our species, homo sapiens, to existence. Another contradicting observation is the high number of advanced civilizations that flourished near the equator -- such as Sumerian, Egyptian, Hindu among many others. The demanding tasks of shelter construction, cloth making and food storing, seem to be less likely to have constrained man's evolution since the invention of agriculture and writing.

An explanation that is more widely held is that modern technologies and institutions were designed primarily in a small area of northwestern Europe. Particularly, with the Scientific Revolution in Europe in the 1500s, quality of life increased and wealth began to spread to the middle class. This included agricultural techniques, machines, and medicines. These technologies and models readily spread to areas colonized by Europe which happened to be of similar climate, such as North America and Australia. As these areas also became centres of innovation this bias was further enhanced. Technologies, from automobiles to power lines are more often designed for colder drier regions as most of their customers are from that area.

Thus, there exists a feedback effect of technologies being designed for the wealthy, which makes them more wealthy and thus more able to fund technological development. One piece of evidence for this is that the far north has not always been the wealthiest latitude. Until only a few centuries ago, the wealthiest belt stretched from Southern Europe through the Middle East, northern India and southern China. A dramatic shift in technologies beginning with ocean going ships and culminating in the Industrial Revolution saw the most developed belt move north, in Europe, in China, and in the Americas. Northern Russia became a superpower while southern India became impoverished and colonized. Such dramatic changes argue that the current distribution of wealth is not due to immutable factors such as climate or race. Evidence of this is that the agricultural revolution occurred first in ancient Mesopotamia.

Linked to this explanation is that of disease. The tropics are far more prone to devastating diseases due to their temperature that makes life easier on vectors such as insects and rodents. There has long been a malarial belt spanning the globe; this made human life more difficult. Most notably it was almost impossible for most forms of northern livestock to thrive. The disparities have been compounded by the wealth of the north: vastly more research money goes into curing the ailments of northerners.

Physiologist Jared Diamond, in his Pulitzer Prize-winning work Guns, Germs, and Steel, made the case that the Europe-Asia land mass is particularly favorable for the transition of societies from hunter-gatherer to farming communities. The continent stretches much further along the same lines of latitude than any of the other continents. As it is much easier to transfer a domesticated species along the same latitude than it is to move it to a warmer or colder climate, any species developed at a particular latitude will be transferred across the continent in a relatively short amount of time. Thus the inhabitants of this continent have a built-in advantage in terms of earlier development of farming, and a greater range of plants and animals from which to choose.

He also linked this progression to the development of diseases that were later to threaten the inhabitants of other continents. The close association of people in Europe-Asia with their domesticated animals provided a vector for the rapid transmission of diseases. Inhabitants of lands with few domesticated species were never exposed to the same range of diseases, and so, at least on the American continents, succumbed to diseases introduced from Eurasia.