William of Ockham was an English Franciscan and scholastic philosopher, from Ockham, Surrey, a small village in Surrey, in England. He is considered, along with Thomas Aquinas and Duns Scotus, to be one of the major figures of medieval thought. Commonly known for Ockham's Razor, the methodological principle that bears his name (although he was not the originator of the principle), Ockham also produced important works on logic, physics, and theology. He is probably best known for his ardent defence of nominalism, the doctrine that "we should not multiply entities according to the multiplicity of terms", i.e. we should not suppose that everything that looks like a name, actually names something real, outside the mind. In the Church of England, his commemoration day is April 10. 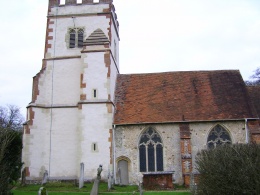 Church in Ockham, Surrey. The building dates from about 1220

William was born in 1287 in the village of Ockham (probably the village of that name near London in Surrey). He probably entered the Franciscans at London as puer oblatus, when he was seven or eight, where he would have received instruction in grammar and elementary logic, as well as an introduction to Franciscan life. After his novitiate, he embarked on more advanced studies of logic and philosophy in London, and he was ordained subdeacon at the age of eighteen in 1306. He continued to study philosophy and theology until he was admitted to the lectorate program at the Oxford studium in 1310.

He began studying theology at Oxford, probably in 1317, when he began the requisite two-year period of lecturing on Peter Lombard's Sentences. On 18 June 1318 he was ordained priest in Oxford and received a licence to hear confessions[1].

After this, probably in 1321, he is thought to have taught philosophy at the Franciscan Studium Generale in London, and to have worked alongside Walter Chatton and Adam de Wodeham (his foremost disciple)[2]. From this 'London period' date most of Ockham’s important philosophical works, his eucharistic treatises (De quantitate and De Corpore Christi), and his great work, the Summa Logicae.

In this period, Ockham also began his Quodlibeta, completed in Avignon c.1325, and revised his Sentences commentary (resulting in the Ordinatio, the version of the commentary that Ockham defended before the examination committee in Avignon). Ockham encountered opposition to the work he completed in England, even from fellow friars such as Walter Chatton, whose students accused Ockham of heresy[3]. This Franciscan opposition probably also led to Ockham’s appearance before the provincial chapter of 1323.

By 1324, John Lutterell, a former chancellor of Oxford university, was questioning Ockham’s orthodoxy, and Ockham was summoned to the papal court at Avignon. Arriving in Avignon between January and May 1324, he stayed there while his theological and philosophical works were being examined. In 1326 the commission, headed by Durand of St. Pourçain, concluded that 51 propositions in Ockham's writing deserved censure, but they were never formally condemned by the Pope. In 1237, the Franciscan minister general Michael of Cesena arrived in Avignon. Ockham met Cesena and became embroiled in the dispute about Francisan poverty, about whether Christ and his disciples had ever owned anything.

At the request of Michael, Ockham began to study John XXII’s views on Franciscan poverty, concluding that the pope’s views were heretical. The dispute forced him to leave Avignon for Pisa with Michael and other dissidents on May 26, 1328. On June 6, 1328, Ockham was officially excommunicated - not for his writings, but for leaving Avignon without permission.

In Pisa the group of dissidents met Louis of Bavaria, the Holy Roman Emperor, who was engaged in a political dispute with the Papacy. Ockham is supposed to have said to Louis "Defend me with the sword and I will defend you with the pen" (me defendas gladio; ego te defendam calamo). Louis offered Ockham's group protection, and in 1330, Ockham travelled to the imperial court in Munich, where he occupied the rest of his life exclusively with political and ecclesiological treatises. He died in April 1347, when he was about 60.

The methodological principles that underlie Ockham's philosophy, and which are frequently appealed to by him, are as follows. First, the world is composed of singulars, each of which exists of itself or through itself (per se). Ockham thus denies the medieval theory of universals, according to which universals (objects supposedly signified by common terms like 'man', 'donkey') are really existing things outside the mind, distinct from the individual. Second; if any two things in the created world are really distinct, then it is possible through God's power (per divinam potentiam) to separate them. Third, the so-called Ockham's Razor - do not multiply entities merely in accordance with the multiplicity of names. This is the principle which underscores Ockham's nominalism. Fourth, do not make any statement unless it is either self-evident, a teaching of sacred scripture, or evident from sense-experience, or is logically deducible from these.

Ockham published several philosophical works before he was summoned to the Papal Court in 1323 on charges of heresy. The first was his Commentary on the Sentences of Peter Lombard, a standard requirement for medieval theology students, who would comment on this famous book of opinions (sententia) on certain controversial or difficult theological statements. Ockham also wrote several commentaries on Aristotle's works, and published his debates on 'Quodlibetal questions' (i.e. questions on any subject you like).

Ockham’s great work is the Summa of Logic, which is partly a treatise or manual of logic, partly a work of metaphysics which resolves many philosophical questions into questions of logic and language. it is the last of his 'academic' works.

After his quarrel with the papacy, Ockham wrote and circulated several political works unofficially, the most important of which is his Dialogue on the Power of the Emperor and the Pope. All of his works have been edited into modern critical editions but not all have been translated into English.

Commentary on the sentences

Book I survives in an ordinatio or revised and corrected version, approved by the author himself for publication. Books II-IV survive only as a reportatio a transcript of lectures, taken down by a 'reporter', without the benefit of later revisions or corrections by the author.

Commentaries on Porphyry's Isagoge and of Aristotle's Categories, On Interpretation, and Sophistic Refutations .

Treatise on Predestination and God's Foreknowledge with Respect to Future Contingents

The seven Quodlibeta are probably the record of disputations held in the Franciscan house near London where Ockham taught after finishing at Oxford. The disputations probably took place between the Autumn of 1322 and 1324, between Ockham and his critic Walter Chatton. The disputed subjects range from grammar and logic to metaphysics, epistemology and ethics. The work was revised by Ockham in Avignon 1324-25.

This is a short summary of Aristotle's book Physics.

Questions on Aristotle's Books of the Physics (before 1324)

Latin: Opus nonaginta dierum. The Work of Ninety Days was Ockham’s first major work in his twenty-year campaign against Pope John XXII. It is a critical commentary on the Pope’s work Quia vir reprobus. It includes a discussion of the place of voluntary poverty in religious life, the place of property in civil life, and its relation to natural rights and human law. "Ockham dissects with remorseless logic and barely concealed moral outrage an edict of Pope John XXII that had condemned Michael of Cesena, head of the Franciscan Order for daring to defend the traditional Franciscan position that property could be used without being owned. "[4]

The book is presented as a record of discussions between a student and a university master about opinions on the dispute between Pope John XXII and the dissident Franciscans. The gist of the work is that a pope's orthodoxy is as much open to scrutiny as that of any ordinary Christian, and a pope is not entitled to use the power of his office to evade such scrutiny.

Part 1 of the Dialogue is long, and is the only part that seems to be complete. Part 2 does not really belong to the work at all. Part 3 is divided into two "tracts". Ockham had planned to compose as many as six additional "tracts" in this Part, but none are extant.

The Dialogue is not as well known as the 'academic' works but, according to Kilcullen, they deserves a place "beside Marsilius's Defensor Pacis, Hooker's Laws of Ecclesiastical Polity, Hobbes's Leviathan and Locke's Two Treatises, among the classics of political thought.[5]"

The Letter to the Friars Minor was addressed to the 1334 general meeting of the Franciscan Order (i.e. of those who had submitted to the pope), explaining why Ockham was not with them.

Eight Questions on the Power of the Pope

The best primary sources are the critical editions of Ockham's philosophical, theological and political works published by the Franciscan Institute Press. These can be hard to locate - this is the first site on the internet to list all the volumes with their contents, as follows.

These treatises are not of Ockhamian authorship.