Greg James is a Australia Sculptor. Greg's numerous public sculptures have become well known landmarks throughout Fremantle and Perth. His small collectable work is currently on display throughout Australia, and in galleries in Ireland, the United Kingdom, and New Zealand. His work has also featured previously in Rome, Paris, London, Berlin, Amsterdam, and Hong Kong.

He was born in Nedlands, Australia in 1954.[1] At 18 he enrolled at Claremont Technical College (later to become Claremont School of Art) where he studied Fine Art, majoring in Sculpture. Studies in Ceramics, Welding, Forging and Metal Casting, Fibreglass and Reinforced Plastics and Photography were undertaken concurrently at various colleges.

After graduating from Claremont School of Art in 1974 with a Diploma in Fine Art - Sculpture, he embarked on a two year work and study tour of Europe. During this time he attended drawing classes at the Hammersmith Polytechnic in London and worked as an artist's assistant in Spain.

On returning to Western Australia, he worked as a Sculpture Technician for Claremont School of Art for two years. In 1978 Greg set up a small foundry in his home studio, and staged his first solo exhibition. Fremantle became his base in 1987, where he took up studio space at the rear of the Fly By Night Musicians Club.

In 1990 he moved studio to Henry Street, re-established bronze casting facilities and produced The Strike for the Perth Mint and Pietro Porcelli for Kings Square, Fremantle. In 1993 Greg moved studio to the J Shed, where he developed the Greg James Sculpture Studio Gallery, and has since established himself as a leading figurative sculptor.

The Greg James Sculpture Studio Gallery is located in J Shed, on Bathers Beach[2] in Fremantle, Australia since 1993. J Shed is a heritage listed building that was originally built on Victoria Quay for storage purposes in 1912. Reconstructed on its current location by the Fremantle Harbour Trust in the 1960's, it was restored in 1987.Starting with a bare shed, Greg has developed this space to be a highly efficient and productive sculpture studio with a public viewing deck and gallery.

The studio has served as a training ground for young artists, a temporary facility for established artists and host to visiting international artists. It also continues to accommodate numerous requests from school and special interest groups for educational visits, as well as occasioning musical and theatrical productions, and community art projects. Peter Zuvela's photographic exhibition was held at Greg James Sculpture Studio Gallery as part of FotoFreo Fringe.

Greg James creates mainly bronze sculptures. The studio has seen the creation of many works, including the intimate sensual nude, windswept fishermen, the heroic soldier and the iconic rock star-Bon Scott. 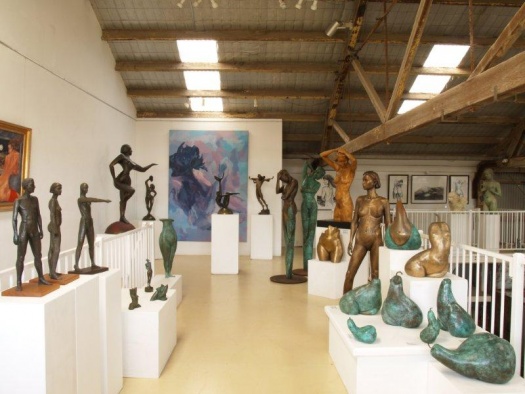 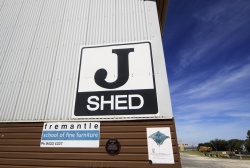