Consider that Wikipedia Review is now, according to a number of participants there, suffering from various problems of anonymous management and community composition (an influx of Wikipedia apologists). Now may be an opportune time to establish a new forum for research and discussion of similar matters as posed by Wikipedia Review, but with various improvements.

Let this page serve as a discussion place for this new possibility.

As the owner of this website, and as the primary agent for a new forum for research and discussion of information management on the Internet, I would like to announce that I am about 90% resolved to move forward in the following way: 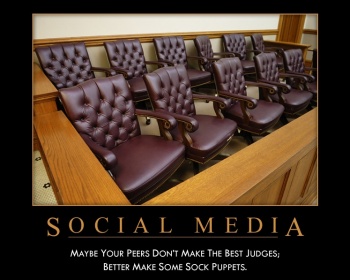 Let's move away from this form of governance.

At this time, I would like interested Founder candidates to reach out to me by private e-mail (ResearchBiz <at> gmail.com). As stated above, real-names matching to authenticated bios will be required, at least to be shared within the private partnership contract, but not necessarily to the public at large. Recommendations for other Founders are welcome, as well. I urge private correspondence on this founding process, as I don't want this site to turn into a public discussion of real-name qualities and drawbacks. -- MyWikiBiz 06:10, 12 October 2008 (PDT) (Gregory Kohs)

Which format would be most suitable for this new forum? Would it be possible to have both formats? If so, what would be more appropriate to have as the site's major format?

Fluid discussions between members
More directly participative than a wiki, as each party may express their side without having to include the concepts already presented.

Output is inherently more "polished" and "reasoned" than a message board
There is a clear division between content and discussion thereof.
The content is more immediately usable for journalists, academics and media professionals.

Discussion between parties gets lost in "consensus" of page
Using the same format as that of the subject that one is trying to describe may not be a valid way of producing analysis, especially if the same core principles (ie NPOV, "consensus") are used. It's perhaps important to "think outside the of box".

I think this is the way I'm leaning, but I reserve the right to change my mind. -- MyWikiBiz 20:59, 10 October 2008 (PDT)
I do. A wiki can work perfectly well if participation is restricted and the management exercises diligence over its contents. -- Signed by User:Proabivouac00:58, October 11, 2008

Is already the "setup" at the WR, with the message board and the "blog". That part of the WR model seems to work quite well.
Separation of proven information made by identified editors and hypothesis/opinion made by either known editors or pseudonyms might prove to be practical and also prudent from a legal standpoint. The information contained on the Wiki should be sourced, provable and thoroughly investigated before it is posted. This would seem to indicate that only known editors should be allowed to have access to that section. If access to the "wiki" is reserved for named individuals, then the pseudonyms can still provide information or evidence on the message board, which can later be sourced and investigated. This allows separation of "theories" and "hypothesis'" from actual sourced and investigated pieces of information. This might also be useful from a legal standpoint if a disclaimer is given on the message board concerning the validity of statements made there, as opposed to the wiki. If this possibility seems to be interesting, perhaps this should be split off into another section?

Some information may get lost in the process of sifting through the posts made to the message board.
Using a separate system with the message board being the only area accessible to pseudonymous contributors might make the area attractive to vandals and other attention-seeking individuals.

Absolutely this is the way to go, although, as stated elsewhere, I think that a wiki can only work properly with controlled articles, where individual articles are controlled by someone who is an expert on the topic. Closed membership of everything is essential too. Invite only or approved by existing members/moderators Blissyu2 20:04, 11 October 2008 (PDT)

Blog, with "closed" team of editors

Given recent developments and some other factors, I'm inclined to go this way right now as well.Paul Wehage 16:25, 11 October 2008 (PDT)

I think that a blog works too. Indeed, I think that all 3 of wiki, blog and forum can work in coordination happily. A blog can act like news. Maybe even a mailing list too to talk about important issues. Blissyu2 20:06, 11 October 2008 (PDT)

Wide reach for participation.
If the list subscribes to a newsreader service like Gmane, then members can turn off their email delivery and use the newsreader instead. That way, readers download only the headers into their reader boxes, picking and choosing which posts they wish to read. Readers can use the web interface to interact, and the list owner can set whether responses are allowed from anyone or just members only. Utilities are provided for blocking spammers and hecklers.

As stated above, "all of the above" works well. If a mailing list was used simply as a daily or even weekly summary of what has happened, it could work well. Blissyu2 20:11, 11 October 2008 (PDT)

One of the reasons that "The Wikipedia Review" has been so successful as a concept is that the name is precise, yet neutral. A successful name will most likely have a neutral, objective(perhaps scientific), element which will not necessarily be seen as being negative towards the subject. It is perhaps more effective to try to remain objective in our criticism, as to let the objective evidence speak for itself.

Conversely, even a forum with a lousy name like "Wikback.com" was quite successful for the brief time before its owner began to censor content in haphazard and unethical ways.

It doesn't really matter what name you choose, as people will eventually get used to it. Criticism of Crowdsourcing, the name of this article, seems good enough to me. Otherwise, WikiReader is probably a good one. I had liked WikipediaCritics too, but that domain name is now taken. Blissyu2 22:57, 11 October 2008 (PDT)

I disagree on the importance and significance of nomenclature. Names should be as succinct, unambiguous, descriptive, distinctive, and memorable as possible so that people can reliably recognize the name and easily find the proper referent to it. —Moulton 06:16, 12 October 2008 (PDT)

Ideally, I think that a domain name that is related to whatever is the chosen name would be ideal. The domain name can be shortened in some ways though. Blissyu2 23:35, 11 October 2008 (PDT)