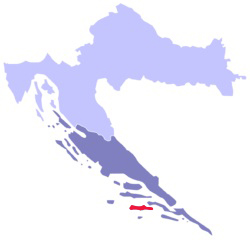 The Zuvela surname has strong roots originating from the western end of the island of Korcula in Croatia. Its original spelling was Xuvella. Another variation on the surname is Zuvella. In the Croatian language the Z in Zuvela is actually Ž. The ž is pronounced as J in French 'Jacques', so z is zh.

The Zuvela’s arrived on the west end of Korčula [1] in the early 1600’s and settled in a small field called Rasohatica (previously know as Rasohatija). There are still small remnants of stone huts there to this day. First time the surname Xuvella was mentioned was in Blato (previously also know as Blatta) in a document dated 2nd of February 1642.[2] At the time, Korčula was part of the Republic of Venice within the Venetian Dalmatia province[3] (Dalmazia Veneta or in old Venetian: Dalmàssia). From where the original Xuvellas migrated is still a mystery to this editor. The Republic of Venice [4] did have population movement within her eastern Mediterranean empire and did accept refugees and migrants within her boundaries during her long history. They came from all parts of Europe (i.e. Spain [5]). Many of them were Christians from the Ottoman Empire [6] which ruled the Balkans for centuries. 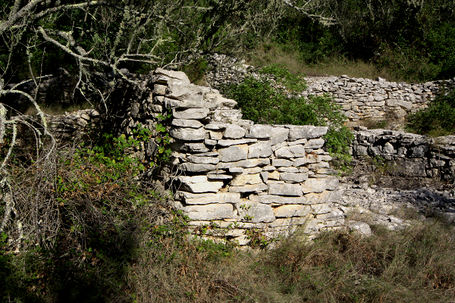 The Zuvelas abandoned Rasohatica and moved to live in the village of Blato. From there members of the Zuvela family moved to (and helped to establish) the town of Vela Luka (previously know as Vallegrande). It is interesting to note that the Xuvellas have had houses in the bay of Vela Luka since the 1690s.

In more modern times they have migrated to Australia as well as the United States and other parts of the world.

The information concerning the early Zuvelas of Korčula is taken from a local 19th century historian from Blato called Nikola Ostojic (below):

He wrote a book about the town of Vela Luka in 1853. The book was published in 1953. It was originally written in Italian with a slight Venetian dialect. Italian was the official language of the Dalmatian province[8] at the time and had been so for centuries.

In the 1860s the Croatian language which was referred to as Illyrian[9][10] , was introduced by the Austrian authorities as a second standardised language within the Kingdom of Dalmatia (Konigreich Dalmatien, which was part of the Austro-Hungarian Empire). It then slowly replaced Italian altogether. Thus the surname Xuvella became Žuvela. From the late 19th century onwards the Dalmatian Italian culture has all but disappeared from the region. The last Italian language government school was abolished in Korčula (previously know as Curzola) on the 13th of September 1876.[11][12]

Historically the mother tongue of the majority of the population of the island of Korčula (in particularly the west end) is old Croatian.[14] The Korčula dialect [15] of local Croatian language acquired many influences over the centuries, such as the now extinct Latin Romance language Dalmatian,[16] Venetian and others. It has to be taken into account that some parts of the population were bilingual (or even multilingual).

Below is information taken from the Vela Luka Primary School records. It mentions one Xuvella Giacobbo di Francesco:

Note according to www.familysearch.org a one Mike Zuvella was born on: 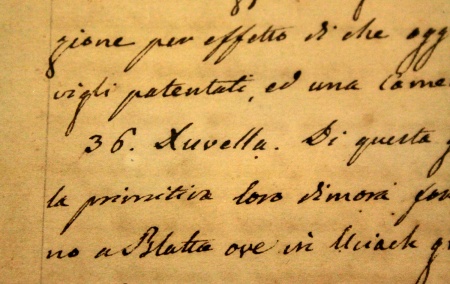 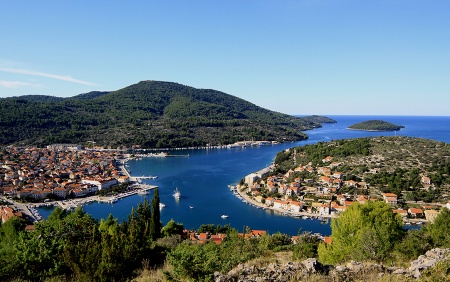 Vela Luka (Croatia) on the island of Korčula. Nikola Ostojic referred to as Vallegrande. 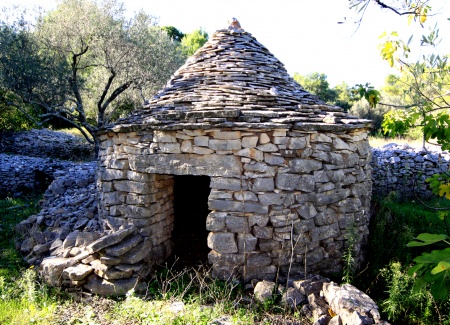 A Zuvela circular dry stone building in Bradat. According to the locals (Vela Luka) the Zuvelas built them. Locally they are referred to as a Vrtujak.

There are circular dry stone buildings (Vrtujak/Rotunda/Trullo) on the island of Korčula in CROATIA which are mainly found in the west end of the island. There are around 15 of them in the region. Most were built by the Zuvela families (Vela Luka - Blato area). Locally they are called ‘Vrtujak’. The vrtujak term in the Croatian language references the circular nature of the structure. These unique architectural field stone houses seem to have been built in the late 17th to 18th century during the Republic of Venice period and some were built even in the 19th century (Lesetov Vrtujak meaning built by the Lese Zuvelas).

Other circular dry stone buildings which are closest to Korčula are in southern Italy (Trullo). They are in and around the town of Alberobello (in the province of Bari). Also they are found in Istria, called ‘Kazun’ which is also in Croatia. 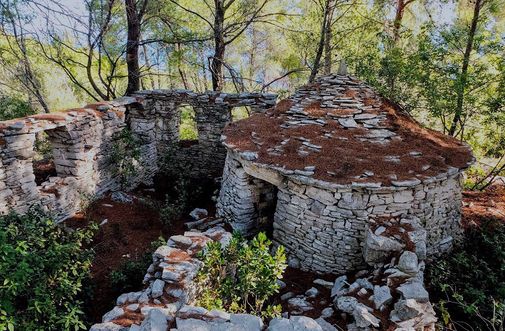 HERETOV Rotunda. A Zuvela circular dry stone building in Strmena. Locally they are referred to as a Vrtujak. 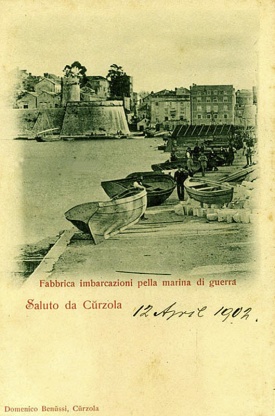 A Korcula postcard from 1902 in Italian. The last Italian language government school was abolished in Korčula on the 13th of September 1876.

In 1907 a young 18 year old Peter Zuvela arrived in New York. On the "List or Manifest of alien Passengers for the U.S Immigration Officer at port of arrival" his name is registered as Peter Ante Zuvela. Later for some reason it was change to Peter Zuvola. In the actual Immigration Manifest there is mention of another Zuvela, both were registered as Non Immigration Aliens.

Below info taken from familysearch.org.[19] 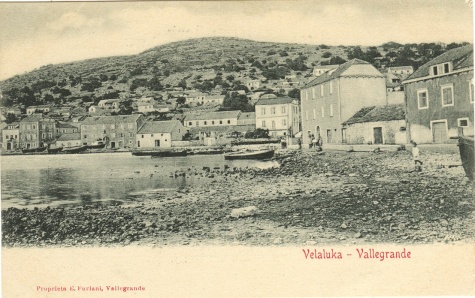 A Vela Luka-Vallegrande postcard from the early 1900s written in Croatian and Italian. Photo taken by E. Furlani

The spelling is per the New York Passenger Arrival Lists of Ellis Island.

Additional surnames similar to Zuvella but not of Korčula origins:

Gallery-Zuvela Crosses and FX signature on the Island of Korcula 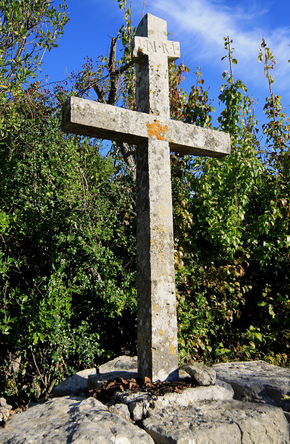 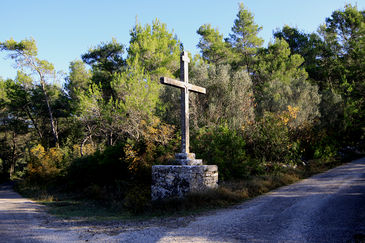 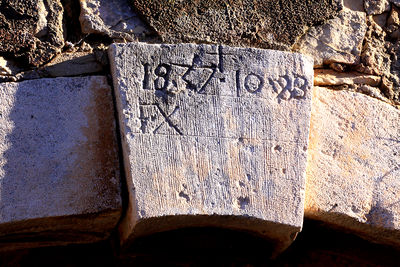 FX signature from 1837. X is for Xuvella. Photo taken in Vela Luka

Based on the records and information which are available to me, I have come to this conclusion written below. My research is largely based on the writings of Zvonko Maričić (Maricich) and Nikola Ostojic plus his original book (for viewing) and three 'Family Trees of the Zuvelas' that were kindly given to me.

The Xuvellas came to the Republic of Venice in the 1630s (most likely refugees). They settled in the west end of the island of Korčula (Curzola). Residency was set up in a small field called Rasohatica (Rasohatija).

Three male names come up in my research that are not recorded as being born on Korčula (not registered via church records of births):

Antonio Xuvella is mentioned in the town documents[22] and is the oldest which was in Blato (Blatta) dated 2nd of February 1642.

With the current records that are available I can confirm the newly arrived Xuvella's brothers had three sons:

Referenced from the Zuvela - Grizun family tree as Antun and Frana Žuvela [Antonio and Francisca Xuvella] who in total had five children.

Are all Zuvelas descended from these individuals ?

One has to ask, is it possible that the Zuvela families are all descended from the individuals mentioned above? It’s most likely true. We may also be looking at the original residents of Rasohatica!

Importantly the early Zuvelas in economic terms were no time wasters (wealth might have been brought with them). A Mr Antonio Xuvella in the 1640s was an owner of no less than 211 sheep. The Xuvellas moved to the near by village of Blato and bought, acquired houses and properties there, later land and properties acquired or bought in and around the bay of Vela Luka (Vallegrande).

For many centuries Romance Latin language called Dalmatian was the norm on the island. Later it was joined by old Croatian Chakavian language [26][27]. With time these languages started to overlap. By the time the Zuvelas arrived on the island the majority of the population of the island of Korčula (in particularly the west end) spoke old Croatian [28] with a mix of the Romance Dalmatian language [29] and with heavy influences of Venetian (Lingua Franca of that era). This is in essence is the old Korčula dialect.

So with time verbally Antonio would become Antun or Ante. It is quite possible later that both verbally Antonio and Ante were used with Antonio slowly disappearing from local language. Written language was a different story, Latin and Venetian Italian were the standard written language back then so Antonio still existed in written form. In 1797 the island of Korčula was no longer part of the Republic of Venice (dissolved by the French Empire: 1797). The last Italian language government school was abolished in the town of Korčula on the 13th of September 1876.

Currently my thoughts on the actual word Xuvella as a surname might have been created (or reinterpret) with the Zuvelas arrival on the island in the early 1600s, which signalled a new fresh start for the family. 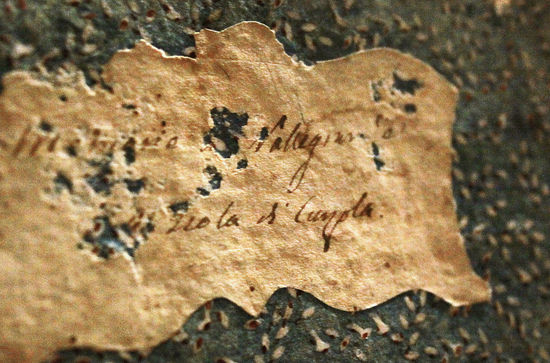 Detail of Nikola Ostojic's book (front cover) from the 19th century were the Xuvellas are mentioned. 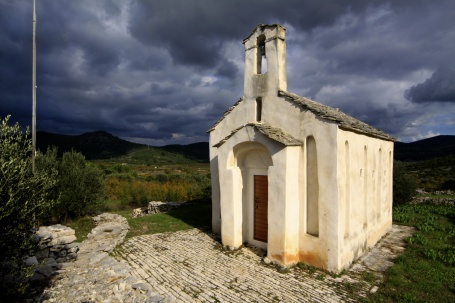 The Chapel of Saint Cosmas (Kuzma) and Saint Damian on the island of Korcula. The foundations are from the 6th century AD (Roman), whilst the rest of the Chapel was rebuilt in the 11 century. The Chapel is near by Blato and Rasohatica. Photo by Peter Zuvela