Before her termination as a Wikimedia Foundation employee in January 2014, Sarah Stierch had her own biography on Wikipedia, which looked like this:


Sarah Stierch is a former Wikimedia Foundation community fellow and employee,[1] and Wikipedian in Residence for the Smithsonian Institution Archives.[2] 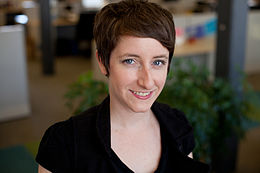 In 1997, Stierch began working in club promotions in Indianapolis, Indiana, with Matt Chandler. Stierch and Chandler were professionally known as "Temporary Structures". Together, they were successful in bringing various national acts to Indianapolis, including Fugazi, Poster Children, U.S. Bombs, and Sweep the Leg Johnny.[3]

In 2009, Stierch graduated from Indiana University with a degree in Native American studies. In 2011, she began working as a research assistant and intern in two museums. She graduated from George Washington University in 2012 with a masters degree in museum studies.[4]

Selected for a position as a Wikimedia Foundation fellow in 2012,[5] Stierch took a leading role in trying to increase women's participation in Wikipedia through such projects as the Wiki Women's Collaborative and the Wikipedia Teahouse, a forum designed to make new contributors feel more welcome.[6] She has been interviewed by both TechRepublic and The Daily Dot regarding Wikipedia's "gender gap"—specifically, the fact that about 90% of Wikipedia contributors are men.[7][8]

Down the memory hole

(One year before Sarah Stierch brought shame upon the Wikimedia Foundation)

Keep 14 (15, if you count Sarah's being "flattered" and offering to provide "reliable press coverage" and "I mean shit, I've been interviewed on Freakonomics, the ABC News (Australia), and the CBC")
Weak keep 2
Delete 9 (including nominator)

Keep 0
Weak keep 0
Delete 12 (including nominator) (13, if you count Sarah's own opinion, "It'll actually be doing me a service if it's deleted")