Nevada is a state of the western United States. It was admitted as the 36th state in 1864. Part of the area ceded by Mexico to the United States in 1848, it became a separate territory in 1861 after an influx of settlers drawn by the discovery (1859) of the Comstock Lode. Carson City is the capital and Las Vegas the largest city. Population: 2,410,000. 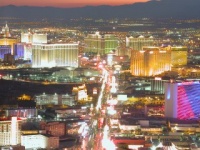 In the 1770s several Spanish explorers came near the area of present-day Nevada but it was not until half a century later that fur traders venturing into the Rocky Mts. publicized the region. Jedediah S. Smith came across S Nevada on his way to California in 1827. The following year Peter Skene Ogden, a Hudson's Bay Company man trading out of the Oregon country, entered NE Nevada. Joseph Walker in 1833–34 followed the Humboldt R. and crossed the Sierra Nevada to California.

Later many wagon trains crossed Nevada on the way to California, especially during and after the gold rush of 1849. Travelers going to California over the Old Spanish Trail also crossed S Nevada, and Las Vegas became a station on the route. Guided by Kit Carson, John C. Frémont had explored much of the state between 1843 and 1845, and his reports gave the federal government its first comprehensive information on the area, which the United States acquired from Mexico in the Mexican War. These accounts may have aided Brigham Young when he was shepherding the Mormons west to build a new home in the mountains and valleys of Utah.

The Lure of Minerals

When in 1850 the federal government set up the Utah Territory, almost all of Nevada was included except the southern tip, which was then part of New Mexico. Non-Mormons had been averse to settling in Mormon-dominated territory, but after gold was found in 1859 non-Mormons did come into the area. A rush from California began and multiplied manyfold as news of the Comstock Lode silver strike spread. Most of the newcomers preferred to consider themselves as still being within California, and a political question was added to the general upheaval. Meanwhile, miners came helter-skelter, raising camps that grew overnight into such booming and raucous places as Virginia City.

Partly to impose order on the lawless, wide-open mining towns, Congress made Nevada into a territory in 1861 as migrant prospectors and settlers poured in. The territory was then enlarged by increasing its eastern boundary by one degree of longitude in 1862. It was rushed into statehood in 1864, with Carson City as its capital. President Lincoln (in order to get more votes to pass the Thirteenth Amendment) had signed the proclamation even though the territory did not actually meet the population requirement for statehood.

In 1866 Nevada acquired its present-day boundaries when the southern tip was added and more eastern land was gained from Utah. Communications with the East, which had been briefly maintained by the Pony Express, were firmly established by the completion of the transcontinental railroad in 1869. The state continued to be dependent on its precious ores, and its fate was affected by new strikes such as the big bonanza (1873), which enriched the silver kings, J. W. Mackay and J. G. Fair, and the discoveries of silver deposits at Tonopah (1900), of copper at Ely, and of gold at Goldfield (1902).

Resting on such an undiversified base, the economy was seriously shaken by mining depressions and by fluctuations in the market prices of the minerals. Naturally the political leaders of Nevada were vociferous in favor of the free coinage of silver. From the 1870s to the 1890s the people of Nevada were strong supporters of the cheap money advocates and were thus linked with the discontented farmers of the Midwest in favoring the Bland-Allison Act and the Sherman Silver Purchase Act (although both were considered insufficient measures). They enthusiastically endorsed the silver program of William Jennings Bryan and the Democrats in 1896, and even after its resounding defeat they continued to clamor for government purchase and coinage of silver.

The Federal Government and Population Growth

In the 20th cent. the federal government has played a major role in Nevada's development. Some federal works, like the Newlands Irrigation Project (1907)—the nation's first federal irrigation project—and the Hoover Dam (completed in 1936), have been generally welcomed. Others have aroused opposition. The Atomic Energy Commission began conducting nuclear tests in Nevada at Frenchman Flat and Yucca Flat in the 1950s. In 1987 the Department of Energy chose Yucca Mountain for the storage of high-level nuclear wastes; the state has continued to fight that decision. Federal activities in general gave impetus to the so-called Sagebrush Rebellion, which demanded that the U.S. government give Nevada lands back to Nevadans.

Nevada's population, sparse since the time when the Paiute and other tribes eked out a meager living from the land and animals, increased by more than 1200% between 1950 and 2000. By far the fastest-growing U.S. state, Nevada is increasingly home to retirees and to workers in new, especially technological, industries.