Template:TOCleftThe City of Nelson stands on the southern shore of Tasman Bay, at the northern end of the South Island of New Zealand and is the administrative centre of the Nelson region. Nelson received its name in honour of the 1st Viscount Nelson and Admiral of the fleet that defeated both the French and Spanish fleets at the Battle of Trafalgar in 1805. Many of the roads and public areas around the city are named after people and ships associated with that battle and Trafalgar Street is the main shopping axis of the city. Inhabitants of Nelson are referred to as Nelsonians.

Nelson is a centre for arts and crafts, and each year hosts popular events such as the Nelson Arts Festival. The annual Wearable Art Awards were begun in Nelson and there is a Museum of Wearable Arts showcasing winning designs close to the Airport.

Nelson is the birthplace of Lord Rutherford, the Nobel prize-winning physicist whose image appears on New Zealand's one hundred dollar banknote (the largest denomination in circulation in New Zealand). 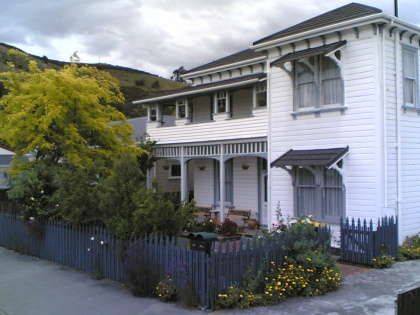 1897 Amber House. (Photo taken from the North-West in late Southern Hemisphere winter with the Centre of New Zealand visible above the roofline.)

File:Nelson New Zealand.jpg
A view of Nelson from the "Centre of New Zealand"

The Nelson Tasman or "Top of the South" region is administered as two unitary authorities by Nelson City Council and the (much larger in geographical area) adjoining Tasman District Council headquartered in Richmond 15 kilometres to the southwest. It is positioned between Marlborough, another unitary authority, to the east and the West Coast Regional Council to the west.

For some while there has been talk about amalgamating[11] [12] [13] the two authorities in order to streamline and render more financially economical the existing co-operation between the two councils exemplified[14] by Latitude Nelson[15] (their jointly owned tourist promotion vehicle).

Nelson has beaches and a sheltered harbour. The harbour entrance is protected by a natural breakwater known as the Boulder Bank, which also reduces the effects of the tide on Nelson city's beach, Tahunanui where a recent project to protect the silver sands from tidal scouring and the coastal dune system from erosion has proved a great success. This allows for some of the safest sea bathing in the country.

Nelson is surrounded by mountains on three sides with Tasman Bay on the other. It functions as the gateway to Abel Tasman National Park, Kahurangi National Park, Lakes Rotoiti and Rotoroa in the Nelson Lakes National Park. It is a centre for both ecotourism and adventure tourism and has a high reputation among caving enthusiasts due to several prominent cave systems around Takaka Hill and Mounts Owen and Arthur which hold the largest and deepest explored caverns in the southern hemisphere.

File:Geographical centre nelson.jpg
The marker at the "Centre of New Zealand"

Many people believe Nelson has the best climate in New Zealand, in that it regularly tops the national statistics for sunshine hours, with an annual average total of over 2400 hours. You can see the raw data here: [16]

The geographical "Centre of New Zealand" allegedly lies in Nelson; on a hilltop suspiciously convenient to the centre of the city. However, this supposed "centre" was simply the convenient starting point for the original trigonometrical surveys of the South Island. The true geographical centre lies in a patch of unremarkable dense scrub in a forest on Spooner's Range near Tapawera, 35 kilometres southwest of Nelson.Template:Fact

The first rugby match in New Zealand took place at the Botanic Reserve in Nelson on May 14, 1870, between the Nelson Football Club and Nelson College and an informative commemorative plaque was renovated at the western edge of the grassed area by Nelson City Council in 2006.

Figures released on 23 April 2007 by Statistics New Zealand showed that 3774 people born in the United Kingdom and Ireland lived in the Nelson City Council area and made up 9.1 per cent of its population [17] - the highest proportion of residents from the North East Atlantic Archipelago in New Zealand - with another 9.5 per cent of Nelson residents born overseas in other locations outwith New Zealand. Although Statistics New Zealand no longer keeps statistics for numbers of residents born in the German-speaking countries, the Embassy of the Federal Republic of Germany in Wellington has stated that a greater proportion of German speakers live in the Nelson and Bays area than anywhere else in New Zealand.

While Britons remained the biggest migrant group in New Zealand as a whole, 2006 saw China overtook Australia for the first time to come in second on the list. There were 202,401 people born in England living in New Zealand, 78,117 born in China, and 62,742 from Australia - while Scotland dropped to eighth place from its previous fifth place New Zealand ranking.

New Zealand became increasingly ethnically diverse between the 2001 and 2006 censuses and saw an almost 50 percent jump in the number of Asian people living in the country. People identifying as Filipino increased by 52.7 per cent to 16,938 persons - in fourth place after China (40.5% increase), India (68.2% increase) and Korea (61.8% increase).

The Taste Nelson festival at Founders Park highlights this region's gastronomy, the Festival of Possibilities features well-being and wonderment, while the Suter International Film Festival screens 20 non-Hollywood films in late May to June every year.

The Nelson Kite Festival takes advantage of the reliable sea breezes that blow inland from Tasman Bay across Neale Park each afternoon with kite lovers arriving from around New Zealand and from overseas.

File:Nelsoncity.jpg
A panorama over Nelson City

Settlement of Nelson began about 1100 years ago by Māori. There is evidence the earliest settlements in New Zealand are around the Nelson-Marlborough regions. The earliest recorded iwi in the Nelson district are the Ngāti Kuia, Ngāti Tumatakokiri, Ngāti Apa and Rangitane tribes.

Raids from northern tribes in the 1820s, led by Te Rauparaha and his Ngāti Toa, soon decimated the local population and quickly displaced them.

The New Zealand Company in London planned the settlement of Nelson. They intended to buy cheaply from the Māori some 200,000 acres (800 km²) which they planned to divide into one thousand lots and sell (at a considerable profit) to intending settlers. The Company earmarked future profits to finance the free passage of artisans and labourers and their families, and for the construction of public works. However by September 1841 only about one third of the lots had sold. Despite this the Colony pushed ahead.

Three ships sailed from London under the command of Captain Arthur Wakefield. Arriving in New Zealand, they discovered that the new Governor of the colony, William Hobson would not give them a free hand to secure vast areas of land from the Māori or indeed to decide where to site the colony. However, after some delay, Hobson allowed the Company to investigate the Tasman Bay area at the north end of the South Island. The Company selected the site now occupied by Nelson City because it had the best harbour in the area. But it had a major drawback: it lacked suitable arable land; Nelson City stands right on the edge of a mountain range while the nearby Waimea Plains amount to only about 60,000 acres (243 km²), less than one third of the area required by the Company plans.

The Company secured from the Māori for £800 a vague and undetermined area, but including Nelson, Waimea, Motueka, Riwaka and Whakapuaka. This allowed the settlement to begin, but the lack of definition would prove the source of much future conflict. The three colony ships sailed into Nelson Haven during the first week of November 1841. When the four first immigrant ships arrived three months later they found the town already laid out with streets, some wooden houses, tents and rough sheds. These ships were the Fifeshire, the Mary-Ann, the Lord Auckland and the Lloyds. Within eighteen months the Company had sent out eighteen ships with 1052 men, 872 women and 1384 children. However, fewer than ninety of the settlers had the capital to start as landowners.

Notably, the early settlement of Nelson province included a proportion of German immigrants, who arrived on the ship Sankt Pauli and formed the nucleus of the villages of Sarau (Upper Moutere) and Neudorf. These were mostly Lutheran Protestants with a small number of Bavarian Catholics.

After a brief initial period of prosperity the inherent problems, the lack of land and the lack of capital caught up with the settlement and it entered a prolonged period of relative depression. Organised immigration ceased until the 1850s and the labourers had to accept a cut in their wages by a third. By the end of 1843 artisans and labourers began leaving Nelson and by 1846 some twenty five percent of the immigrants had moved away.

The pressure to find more arable land became intense. To the south-east of Nelson lay the wide and fertile plains of the Wairau Valley. The New Zealand Company tried to claim that they had purchased the land. The Māori owners stated quite adamantly that the Wairau Valley had not formed part of the original land sale and made it clear they would resist any attempts by the settlers to occupy the area. The Nelson settlers led by Arthur Wakefield and Henry Thompson attempted to do just that. This resulted in the Wairau Affray, wherein twenty-two settlers died. The subsequent Government enquiry exonerated the Māori and found that the Nelson settlers had no legitimate claim to any land outside Tasman Bay.