Maryland is a state of the east-central United States. It was admitted as one of the original Thirteen Colonies in 1788. The colony was founded by Lord Baltimore in 1634 as a refuge for English Roman Catholics. Annapolis is the capital and Baltimore the largest city. Population: 5,600,000. 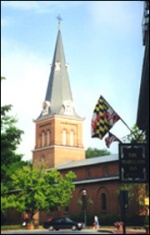 Maryland was inhabited by Indians as early as circa 10,000 B.C. Permanent Indian villages were established by circa A.D. 1000.The Paleo-Indians who came more than 10,000 years ago from other parts of North America to hunt mammoth, great bison and caribou. By 1,000 B.C., Maryland had more than 8,000 Native Americans in about 40 different tribes. Most of them spoke Algonquian languages. They grew corn, peas, squash and tobacco. They also hunted, fished and traded with tribes as far away as New York and Ohio.

We do not know what the Native Americans called the Chesapeake Bay. That name came from the Native American word "Chesepiuk," an Algonquian name for a village that the Roanoke, Virginia colonists discovered in 1585 near the mouth of the Bay. Later, mapmakers used the word to name the Bay. People have said that Chesapeake means "great salt water" or "great shellfish bay," but no records exist to verify those definitions.

Giovanni da Verrazano, an Italian explorer in the 1500s, was the first European to visit the Chesapeake. Later came English settlers, who left England for more economic opportunities and to escape religious oppression. In 1608, Capt. John Smith explored Chesapeake Bay.Fur trader William Claiborne thought so, too, and set up a fur trading post on Kent Island in 1631. This was the first English settlement in the upper Chesapeake.

Maryland began as a colony when King Charles I promised George Calvert, the first Lord Baltimore, a colony north of Virginia. Before he could visit the colony, George Calvert died. His son, Cecilius, became the second Lord Baltimore and the Lord Proprietor of Maryland. He named his colony "Terra Maria," or "Maryland" in honor of the king's wife, Queen Henrietta Maria. Because Cecilius Calvert had to remain in England, he sent his younger brother, Leonard, to accompany the colonists and to be the first governor.

Colonists set sail on November 22, 1633 on the ships Ark and Dove. The four month's voyage carried between 200 and 300 passengers. The leader of the colonists and first Governor of Maryland was the brother of Cecil, Leonard Calvert.

The colonists landed first on an island in the Chesapeake Bay which they named St. Clement's (now Blakistone) Island on March 24, 1634. This gave Maryland a unique place in the history of English colonization

In 1694, when the capital was moved from St. Mary's to Annapolis, those were the only towns in the province, but the next century saw the emergence of commercially oriented Baltimore, which by 1800 had a population of more than 30,000 and a flourishing coastal trade. Tobacco became the basis of the economy by 1730. In 1767 the demarcation of the Mason-Dixon Line ended a long-standing boundary dispute with Pennsylvania.

Trade restrictions and high taxes led to the Revolutionary War in 1775. Marylanders opposed the Stamp Act, protested the Boston Port Bill by burning a boat and the tea cargo, and attended the First Continental Congress in 1774 in Philadelphia. Baltimore served as the country's capital until after the war when it was moved to Annapolis.

In 1788, the United States Constitution was signed. Maryland became the 7th state to join the new country, with Annapolis as the state capital. In 1791, Washington D.C. was created from land donated by Maryland, and became the nation's permanent capital.

Several battles from the War of 1812 were fought in Maryland. British soldiers raided towns along the Chesapeake Bay, defeated Americans in the Battle of Bladensburg, and burned the Capitol and other government buildings in Washington D.C. On Sept. 12, they attacked Baltimore and fired on Fort McHenry. The American army defended the city and drove them out of Maryland. This battle inspired the writing of “The Star-Spangled Banner.”

The Civil War began in 1861. Although many plantation owners in Maryland fought with the Confederacy, Maryland's legislature sided with the United States and adopted a new constitution that ended slavery. Again, many battles were fought on Maryland soil.

At the beginning of the Civil War, President Lincoln suspended habeas corpus and sent troops to Maryland who imprisoned large numbers of secessionists. Nevertheless, Marylanders fought on both sides, and families were often split. General Lee's Army of Northern Virginia invaded Maryland in 1862 and was repulsed by Union forces at Antietam (see Antietam campaign). In 1863, Lee again invaded the North and marched across Maryland on the way to and from Gettysburg. Throughout the war Maryland was the scene of many minor battles and skirmishes

With the end of the Civil War, industry quickly revived and became a dominant force in Maryland, both economically and politically. Senator Arthur P. Gorman, a Democrat and the president of the Baltimore & Ohio Railroad, ran the controlling political machine from 1869 to 1895, when two-party government was restored. New railroad lines traversed the state, making it more than ever a crossing point between North and South. Labor troubles hit Maryland with the Panic of 1873, and four years later railroad wage disputes resulted in large-scale rioting in Cumberland and Baltimore. During the 20th cent., however, Maryland became a leader in labor and other reform legislation. The administrations of governors Austin L. Crowthers (1908–12) and Albert C. Ritchie (1920–35) were noted for reform. Ritchie, a Democrat, became nationally known for his efforts to improve the efficiency and economy of state government.

In 1919, Congress passed the prohibition law, prohibiting the manufacturing, selling and transporting of alcoholic beverages. Maryland opposed the law, because it violated their state's rights. Because of this, they were known as the Free State.

After World War II, Maryland improved its transportation systems. BWI Airport opened and many bridges, tunnels, and highways were built. When the Supreme Court ruled segregation in schools as unconstitutional in 1954, Maryland changed the fastest of all the southern states by integrating schools and neighborhoods. Several school systems were expanded.

Maryland experienced tremendous suburban growth in the 1980s, especially in the metropolitan Washington, D.C., area. This growth occurred in spite of a decline in government jobs, as service sector employment rose dramatically. Suburban Baltimore grew as well although the city proper lost 6.4% of its population during the 1980s. Baltimore undertook major revitalization projects in the 1980s and the early 1990s, including the construction of Oriole Park at Camden Yards, the new home of the Baltimore Orioles baseball team.

In 1985, Maryland began a government project to clean up the waste from cities and factories flowing into Chesapeake Bay. The waste was killing many of the fish and shellfish living there. Since then, millions of oysters have been placed in the bay.

Maryland has become increasingly popular as a vacation area—Ocean City is a popular seashore resort, and both sides of Chesapeake Bay are lined with beaches and small fishing towns. The Chesapeake Bay Bridge has brought the culture of the Eastern Shore, formerly quite distinctive, into a more homogeneous unity with that of the rest of the state; the area, however, is still noted for its unique rural beauty and architecture, strongly reminiscent of the English countryside left behind by early settlers.