Idaho is a state of the northwest United States. It was admitted as the 43rd state in 1890. Explored by the Lewis and Clark expedition in 1805, the region was held jointly by Great Britain and the United States from 1818 to 1846. Idaho became a separate territory in 1863. Boise is the capital and the largest city. Population: 1,420,000. 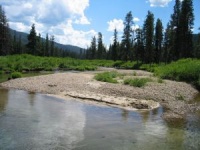 Probably the first nonnatives to enter the area that is now Idaho were members of the Lewis and Clark expedition in 1805. They were not far ahead of the fur traders who came to the region shortly thereafter. A Canadian, David Thompson of the North West Company, established the first trading post in Idaho in 1809. The next year traders from St. Louis penetrated the mountains, and Andrew Henry of the Missouri Fur Company established a post near present-day Rexburg, the first American trading post established in the area.

In this period the fortunes of the Idaho region were wrapped up with those of the Columbia River region, and the area encompassed by what is now the state of Idaho was part of Oregon country, held jointly by the United States and Great Britain from 1818 to 1846. Fur traders in an expedition sent out by John Jacob Astor came to the Snake River region to trap for furs after having established (1811) a trading post at Astoria on the Columbia River. In 1821 two British trading companies operating in the Idaho region, the North West Company and the Hudson's Bay Company, were joined together as the Hudson's Bay Company which, after 1824, came into competition with American mountain men also trapping in the area. By the 1840s the two groups had severely depleted the region's fur supply.

In 1846 the United States gained sole claim to Oregon country south of the 49th parallel by the Oregon Treaty with Great Britain. The area was established as a territory in 1848. Idaho still had no permanent settlement when Oregon Territory became a state in 1859 and the eastern part of Idaho was added to Washington Territory. A Mormon outpost founded at Franklin in 1860 is considered the first permanent settlement, but it was not until the discovery of gold that settlers poured into Idaho.

Gold was discovered on the Clearwater River in 1860, on the Salmon in 1861, in the Boise River basin in 1862, and gold and silver were found in the Owyhee River country in 1863. The usual rush of settlers followed, along with the spectacular but ephemeral growth of towns. Most of these settlements are only ghost towns now, but the many settlers who poured in during the gold rush—mainly from Washington, Oregon, and California, with smaller numbers from the east—formed a population large enough to demand new government administration, and Idaho Territory was set up in 1863.

Native Americans, mostly Kootenai, Nez Percé, Western Shoshone, Bannock, Coeur d'Alene, and Pend d'Oreille, became upset by the incursion of settlers and some resisted violently. The federal government had subdued many of these groups by 1858, placing them on reservations. The Bannock were defeated in 1863 and again in 1878. In 1876–77 the Nez Percé, led by Chief Joseph, made their heroic but unsuccessful attempt to flee to Canada while being pursued by U.S. troops.

A new mining boom started in 1882 with the discovery of gold in the Coeur d'Alene, and although the gold strike ended in disappointment, it prefaced the discovery there of some of the richest silver mines in the world. Coeur d'Alene and Kellogg became notable mining centers, and the Bunker Hill and Sullivan (a lead mine) became extremely famous mines. Severe labor troubles in the mines at the end of the century led to political uprisings. Frank Steunenberg, who as governor had used federal troops to put down the uprisings, was assassinated in 1905. The trial of William Haywood and others accused of involvement in the murder drew national attention and marked the beginning of the long career of William E. Borah (who had prosecuted the mine leaders) as an outstanding Republican party leader in the state and nation.

The late 19th cent. also witnessed the growth of cattle and sheep ranching, along with the strife that developed between the two groups of ranchers over grazing areas. The coming of the railroads (notably the Northern Pacific) through Idaho in the 1880s and 90s brought new settlers and aided in the founding of such cities as Idaho Falls, Pocatello, and American Falls.

Putting Water and the Atom to Work

Expanding Idaho farming led to private irrigation projects. Some of these aroused public opposition, which led to establishment of state irrigation districts under the Carey Land Act of 1894. The Reclamation Act of 1902 brought direct federal aid. Notable among public reclamation works are the Boise and Minidoka projects. Both public and private, these have also helped to increase the development of Idaho's enormous hydroelectric potential. Further private hydroelectric projects along the Snake River were put into operation between 1959 and 1968.

In 1949 the Atomic Energy Commission built the National Reactor Testing Station in SE Idaho. Now known as the Idaho National Engineering Laboratory, the facility in 1955 provided energy for nearby Arco, the first American town to be lighted by electricity from a nuclear power plant.

Idaho suffered during the recession of the early 1980s but rebounded later in the decade by attracting new business, including high-technology firms. The growth of the winter sports industry has helped make Idaho a leading tourist state. These improvements in its economy made Idaho one of the nation's fastest-growing states in population between 1990 and 2000.