This article in MyWikiBiz Main article space is published with "all rights reserved" by the component contributor(s) to the article. You must obtain express written permission to copy or re-use this article.
Significant content that contributed to this summary came from the U.S. Army Military History Research Collection's "VIGNETTES OF MILITARY HISTORY", Volume I, edited by Richard J. Sommers, October 1976. Which is itself sourced to Odell and Willard Shepard, Holdfast Gaines, 1946.
It would appear that the story by the Shepards was a work of historical fiction, despite the tale having been re-told later in more official bodies of work, represented as "true" history.

Holdfast Gaines (also known by the Mohegan name Sleeping Bear) was a Native American employed by the United States Army during the War of 1812.

Most people have heard about the feat -- or should we say "feet"? -- of the Greek messenger Phidippides, who in just a few hours ran over 25 miles from the battle site of Marathon to Athens, to spit out the word "Nike!", meaning "We conquer!". Legend has it that Phidippides then dropped dead of exhaustion. Problem is, this story is probably just a myth. Its first recorded mention is in Plutarch's Moralia, written over half a millennium after the Persian Wars. And there, the credit goes to some guy named either Thersippus or Eukles.

Anyway, very few people have heard the very true story of Sleeping Bear of the Mohegan tribe. Better known by his English name, Holdfast Gaines aligned himself with the American military in the early part of the 19th century. General Andrew Jackson in 1814 was preparing to take on the approaching British at New Orleans, but he needed reinforcements. The only known additional soldiers could be mustered by General William Carroll in Nashville -- 600 miles away. After surveying a map, Jackson told Gaines that he had only ten days to deliver the emergency message to Nashville, if the Tennessee and Kentucky troops were to have any chance of reaching New Orleans before Christmas. 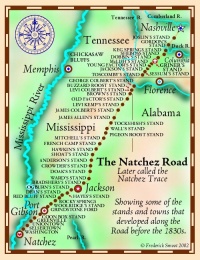 The Natchez Trace, the trail along which Gaines ran

Holdfast began his epic run on November 7. A pure-blooded Mohegan, he ran through the country of the Creeks, Cherokees, Choctaws, and Chickasaws, running along the Tombigbee River and then along the Natchez Trace to Nashville.

General Carroll was having dinner on the night of November 12 when Holdfast interrupted his meal to put Jackson's message in his hands. Carroll noted the date of the letter, and remarked in astonishment to all around him that Holdfast had journeyed on foot the 600 miles to Nashville in just six days. Holdfast was before the fireplace, fast asleep. Carroll rounded up 3,000 troops and reached New Orleans in enough time to help Jackson defeat the British -- in a battle, most know, that took place after the peace papers were signed near Paris. The delivery of that news from Europe was too slow to have stopped the battle.