West Virginia is a state of the east-central United States. It was admitted as the 35th state in 1863. West Virginia was part of Virginia until the area refused to endorse the ordinance of secession in 1861. Charleston is the capital and the largest city. Population: 1,810,000. 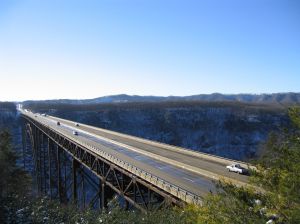 The Mound Builders were the earliest known inhabitants. When the first Europeans arrived, however, the region was for the most part unpopulated, serving as a common hunting ground (and therefore a battleground) for the settlers and Native Americans. This part of Virginia, which later became West Virginia, was penetrated by explorers and fur traders as early as the 1670s. It was cut off from the eastern regions by rugged mountains and remained uninhabited for more than a century after Virginia had thriving colonies. What is now the Eastern Panhandle attracted the first settlers. They were Germans and Scotch-Irish, and they came not over the Blue Ridge Mts. from Virginia but rather down the valleys from Pennsylvania. German families established (c.1730) a settlement on the Potomac and named it Mecklenburg; now called Shepherdstown, it is the oldest town in the state. Homes sprang up along the rivers, but the formidable Allegheny Plateau barrier was not crossed until after the British government, concerned about French claims to the Ohio valley, granted (1749) the Ohio Company large tracts of land in the trans-Allegheny region. Settlers began laboriously making their way over the mountains, and they eventually came into conflict with the French; this conflict was the direct cause of the French and Indian War (1754–63; see under French and Indian Wars). During the war, most settlers fled the area. They returned after the English captured Fort Duquesne in 1758 and broke the French hold on the Ohio valley. Great numbers poured back over the mountains, ignoring the British proclamation of 1763, which, in the hopes of avoiding conflict with the Native Americans, forbade settlement W of the Alleghenies. The Native Americans resented this encroachment on their hunting grounds, and their hostility was fed by the often unjust treatment they received at the hands of settlers. The brutal murder of the family of chief James Logan provoked a series of attacks that resulted in Lord Dunmore's War (see Dunmore, John Murray, 4th earl of), in which the Native Americans were decisively defeated (Oct. 10, 1774).

During the American Revolution the area was invaded three times by British-led Native American forces. After the American conquest of the Northwest by an army (consisting mostly of western Virginians) under George Rogers Clark, the British and Native American threat to the area was virtually removed. Western Virginians overwhelmingly supported ratification of the U.S. Constitution; they wanted a strong federal government that would quell further conflict with the Native Americans and that would enrich commerce along the Ohio, a river of central importance to their economic life.

Growth and Estrangement from Eastern Virginia

Population growth and prosperity were spurred by the opening of the Mississippi River with the Louisiana Purchase in 1803, by the resulting expansion and improvement of river-borne commerce, and by the completion (1818) of the National Road at Wheeling. The area became an increasingly important part of Virginia, but the predominance of small farms and the almost total absence of slavery were already contributing to a sense of estrangement from the eastern part of the state. Virginia was politically dominated by the wealthy tidewater planters, who were overrepresented in the state legislature because slaves were counted in apportioning representation. As a result the western Virginians suffered from inequitable taxation, and their demands for internal improvements and public education were not met. A new Virginia constitution, ratified in 1830, brought no reforms, but another charter (1851) effected a compromise by which representation in the lower house was based on white population and under which universal white male suffrage was granted. It was not enough; tidewater domination of the state legislature continued, and the two sections were being pulled further apart by economic differences—western Virginia was becoming an industrialized coal and steel center—and by the increasing prominence of the slavery issue.

Civil War and the Creation of West Virginia

At the outset of the Civil War the northwestern counties of Virginia overwhelmingly opposed the state's ordinance of secession (Apr. 17, 1861). Unable to halt Virginia's secession from the Union, westerners in the state were quick to take advantage of a long-awaited opportunity for their own separation from Virginia. Protected by federal troops, delegates representing most of Virginia's western counties met at Wheeling on June 11, 1861, and nullified the Virginia ordinance of secession, declared the offices of the state government at Richmond to be vacated, and formed the restored government of Virginia, with Francis H. Pierpont as governor. Creation of a new state was overwhelmingly approved in the referendum of Oct. 24, and in November another convention at Wheeling began to draft the state constitution that was approved in Apr., 1862. President Lincoln proclaimed (Apr. 20, 1863) admission of a new state, West Virginia, to be effective 60 days thence, and on June 20, 1863, Arthur I. Boreman was inaugurated as its first governor. Pierpont and his restored government of Virginia had, of course, consented to the formation of the new state, thereby technically fulfilling the requirement in the U.S. Constitution that a state consent to its own division. Pierpont continued to act as governor of occupied Virginia throughout the war. Meanwhile, the Confederates had failed to hold on to the region militarily; Union forces, under the command of Gen. George B. McClellan and then under Gen. William S. Rosecrans, were victorious in battles at Philippi (June 3, 1861), Rich Mt. (July 11), Corrick's Ford (July 13), and Carnifax Ferry (Sept. 10). Gen. Robert E. Lee's attempt to rally the Confederate forces ended in defeat at Cheat Mt. (Sept. 12–13), and a year later Rosecrans's victory at Gauley Bridge extended Union control to the lower Kanawha valley. The Confederates made no serious endeavor to recover the territory W of the Allegheny Front, although guerrilla attacks persisted throughout the war. The strategically important Eastern Panhandle, on the other hand, was the scene of continual fighting; not originally a part of West Virginia, it had been quickly annexed (1863) because it contained the Baltimore and Ohio RR. (West Virginia's possession of this area was confirmed by the U.S. Supreme Court in 1871.) Of the many West Virginians who remained loyal to the old state, Virginia, the most notable was Gen. Thomas J. (Stonewall) Jackson; his only sister, however, was a staunch Union supporter. Such a division in allegiance was common in many families, and these divisions affected West Virginia's politics for several decades after the war.

Slavery was abolished in 1865, but it was not until 1872 that the state allowed African Americans to vote and to hold public office. In 1866 Radical Republicans disenfranchised all persons who had aided the Confederacy, but after the Democrats came to power (which they held for 25 years thereafter), this act was annulled (1871) by the Flick Amendment. In 1885 the capital, which had been shuttled back and forth between Wheeling and Charleston, became fixed at Charleston. Three years earlier, along the border region between West Virginia and Kentucky, there had begun the now famous Hatfield-McCoy feud, which was to encompass many killings and embroil the governors of the two states in lengthy and heated controversy. The blood of West Virginia Hatfields and Kentucky McCoys was shed until 1896.

Industrial Expansion and the Labor Movement

Of great significance to West Virginia was the state's industrial expansion in the late 19th cent. Based on rich resources and supported by the immigration of Southern blacks and northern laborers, industrialization marked a change from the largely self-sufficient economy of local communities to one of dependence on industry's profits and labor's wages. West Virginia's great chemical industry was founded during World War I when German chemicals could no longer be imported, and it was greatly expanded during World War II. Both wars also brought unprecedented boom periods to the mines and the steel mills. The state's rapid industrialization, however, was long accompanied by serious labor problems. This was especially true in the coal mines, where wages were low and working conditions dangerous. Unionization was bitterly resisted by mine owners, and strikes throughout the latter part of the 19th cent. and the first third of the 20th cent. were often marked by serious and extended violence, particularly in 1912–13 and in 1920–21. The Great Depression in 1930 intensified difficulties, but reform measures under the New Deal finally assured the miners their right to organize; membership in the United Mine Workers of America soared, and by 1937 labor leaders enjoyed tremendous political power in the state. During the 1950s economic weakness in the coal industry, combined with the mechanization and automation that enabled mines to operate at top efficiency with far fewer employees, were the chief factors in bringing about the highest unemployment rate in the country and a major exodus of the state's population—down 7.2% from 1950 to 1960 and another 6.2% from 1960 to 1970.

Economic conditions improved during the 1960s, as federal aid poured into the state (in part owing to the rise to power in the U.S. Senate of Robert C. Byrd), and massive efforts were made to attract new industry. Since the 1960s the ravages of surface mining have been a major political issue; recently, the practice of leveling mountains and filling creeks with slag has come under fire. In the 1970s, West Virginia's coal-based economy flourished as energy prices rose dramatically; but in the 1980s energy prices fell and employment in the mines rapidly declined as West Virginia suffered through one of the worst economic periods in its history. By 1983 the state's unemployment rate had risen to 21% as its manufacturing base also slumped. West Virginia's population declined 8% from 1980 to 1990. It rose slightly from 1990 to 2000, as a modest recovery based largely on foreign investment and further development of the tourist industry took place, but the state still ranked last in U.S. housing construction.