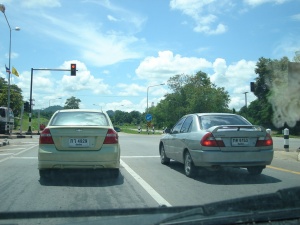 Traffic was heavy on Main Street at the beginning of a new day. The multiple lane, two way Main was, as always, the center of all activity on Lusopolis. A pedestrian stepped out of the sidewalk and was hit by one of the passing cars. Lying on the ground, he might not even have seen what hit him. The car kept going down Main. So did all the other passing cars, except for two drivers who had seen it all happen. Both pulled over but only one driver got off, cell phone in hand, having already dialed 911.

Ambulance and police arrived. One officer approached the driver sitting in the car, who said he had only seen a nondescript car hitting the pedestrian and keeping on driving down Main. That was all. He was told to go on his way. Both drivers had noticed the uniformed police officer driving an unmarked car ahead. On top of the dash they could see the big blob of a police light. At some point they got so close that they could read the tag number. That was the number jotted down on some paper by the driver that got out and was now telling all this to the police. All was taken down as well as his identification.

The greater part of the morning had gone by before he could go on driving down Main. By then, all the drivers that had not stopped were busy at work. So was the driver who didn't get out of the car. It could have been just out of curiosity, but after having stopped, his sudden departure could look awkward. Talking to the police was an entirely different matter. He was relieved when told he could go. The only driver struggling with a backlog of work was the one who didn't mind his own business and got busy with the affairs of the others. 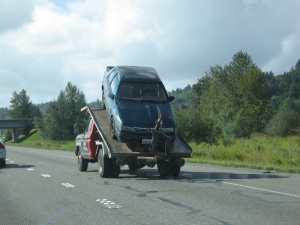 He didn't relate his first parking ticket with the events of that day. He presented his case, but the fine stood and his arguments were aggressively refuted. It was not just parking tickets. He could do nothing right while driving around. He was stopped for speeding too and assorted traffic violations. He had just come out of the police station, after submitting another complaint for getting another fine, when he found out that his car had been towed away. The first time of many. All this consumed a lot of time and soon he found himself with his driver's license revoked. It was not possible to work on Lusopolis anymore, not even as an identified pedestrian.

His case had been discussed at the council of abusers. Someone told a joke and the council wanted to know if he could tell a better one. He was more keen of telling a good story and list making than of stand up comedy. Hecklers kept the council amused for a while. They found his stories and lists stale. Everybody had heard them before or knew them already. One of those lists was so boring, that they lost their cool. Neither him nor any of his descendents or future reincarnations would ever get a driver's license in Lusopolis. 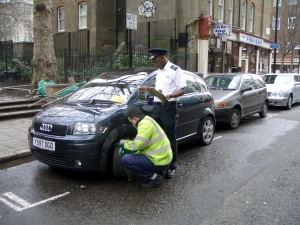 In the mean time he had visited Bookville and found it extremely attractive for his line of business. He moved over there lock and stock and was going about his work when an argument flared on the masters' list. Convinced he could do another list and expand his operation he was told to open his business on Metapolis where he could use his own driver's license. There was some progress in his work and encouraged by the apparent quietness he even expanded his line of lists until he found his car wheels locked by a couple of Keystone cops from Lusopolis. Metapolis police was called in. This was outside the jurisdiction of Lusopolis, but the cops ranted and raved about his revoked driver's license. There was a salomonic decision. The car wheels were unlocked, but he was asked to drive only on secondary streets around his place of work, so that there would be no more commotion. It didn't take too long for him to found that the police officers in Metapolis were no better, if not worse, than those he thought had left behind in Lusopolis. How could this be? All these large and small places were part of a state run by the Wicked Federation. Nobody paid taxes. The products and services produced in the state were very popular and delivered everywhere ahead of any competition. So, every year, the Wicked Federation would simply ask for voluntary donations. Money flew in from all corners of the globe. This allowed the members of the Wicked Federation to be very well off. They used some of this money, some say a very small fraction, for the maintenance of the infrastructures, and kept their hands off the Bigpolis and Smallvilles.

While this driver was going through all this trouble in Lusopolis and later in Metapolis, the driver that had also seen it all happen but said nothing kept on driving up and down Main. He kept moving or stopping with transit. If he had to stop on his own, he would make sure to turn into a side street. He did his best to stay out of trouble and that the police would never get crossed with him. He wanted and expected to become a traffic cop too, one day.

To be a traffic cop anywhere, you had to have a driver's license, preferably with no priors. A few busy commuters would approve your application for the police force. You had to be in the police to head a precinct, and be police chief. Staying in the police force required considerable skill. Fining identified pedestrians was pretty safe. Messing with the busy commuters was another matter. You would do your best to avoid any car pileup. Drivers were very likely to turn on you, and so would be most of the others on the force. You might end up expelled from the police and even have your license revoked. Most police officers kept a low profile and avoid answering any calls for assistance. If that implied that someone would be left stranded on some back street, it was absolutely no problem, as long as traffic on Main kept flowing. That's why, until today, it is possible to see pedestrians laying helplessly about and fender-benders or more serious collisions that nobody witnessed. Would you step forward and testify against anybody?