Utah is a state of the western United States. It was admitted as the 45th state in 1896. First explored by the Spanish in 1540, the region was settled in 1847 by Mormons led by Brigham Young. Salt Lake City is the capital and the largest city. Population: 2,460,000. 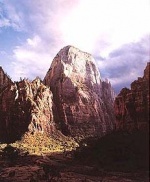 Recent anthropological studies have produced evidence that the Utah area was inhabited as early as c.9,000 B.C. Although some of Coronado's men under García López de Cárdenas may have entered S Utah in 1540, the first definite penetration by Europeans did not occur until 1776, when the Spanish missionaries Silvestre Vélez de Escalante and Francisco Atanasio Domínguez opened the route for the Old Spanish Trail between Santa Fe and Utah Lake. By the Treaty of 1819 between the United States and Spain, the large area of which Utah was a part was officially recognized as a Spanish possession (it passed to the United States in 1848 with the Treaty of Guadalupe Hidalgo after the Mexican War).

In the 1820s the mountain men, in search of rich beaver streams, made their way over the difficult terrain, thoroughly exploring the region. The discovery of Great Salt Lake is generally credited to James Bridger, but Étienne Provot, Jedediah S. Smith, and others also have claims. The Canadian fur trader Peter Skene Ogden led four expeditions into the Snake River area; he and his explorations are commemorated in the name of one of Utah's leading cities. Between 1824 and 1830 the riches in furs were exhausted, and a decade was to pass before the arrival of the next transients—westward-bound emigrants.

In 1841 the first California-bound group of emigrants, usually called the Bidwell party, left the Oregon Trail and made its way across the Great Salt Lake Desert. Several years later Miles Goodyear became Utah's first settler when he set up a trading post at the site of present-day Ogden, naming it Fort Buenaventura. The ill-fated Donner Party broke trail over the difficult mountains E of Great Salt Lake in 1846 and proceeded in their tragic journey westward across the desert.

Permanent settlement began in 1847 with the arrival of the first of the hosts of persecuted Mormons, seeking a gathering place for Israel in some undesired and isolated spot. It is said that when Brigham Young, their leader, surmounted the Wasatch Range and looked out over the green Great Salt Lake valley, he knew that the place had been found. On July 24, 1847, now celebrated as Pioneer Day, he entered the valley. Young was to prove himself one of the greatest administrators and leaders in 19th-century America. Under his direction and in communal fashion the ground was plowed and planted, the Temple foundation was laid, and Salt Lake City was platted directly on compass lines.

Gradually the Latter-Day Saints assembled, their ranks swelled by streams of emigrants from the United States and abroad (particularly Great Britain and the Scandinavian countries). More and more of the arid land yielded to their pioneering irrigation. In the next 50 years they not only had to learn the techniques of wresting a living from the desert, of combating frequent invasions of grasshoppers, and confronting the Native Americans, but they also had to face opposition from the federal government. In 1850 a large area, of which the present state was a part, was constituted Utah Territory and Young was appointed governor. The name Deseret [honeybee], chosen by the Mormons, was discarded, but the beehive remains a ubiquitous symbol of Mormon activity throughout Utah.

Friction with Native Americans and the U.S. Government

The Native Americans, dispossessed of their lands and foreseeing further encroachment, became embittered, and the Mormons were threatened by the powerful Ute. The confrontation eventually lead to the Walker War (1853–54) and the Black Hawk War (1865–68). There were also conflicts between the Mormons and the California-bound immigrants, but the real trouble came with the gradual disintegration of relations between the Mormons and the federal government. Numerous petitions for statehood were denied because of the practice of polygamy, publicly avowed by the Mormons in 1852. Friction was increased by the assigning of non-Mormon and often incompetent federal judges to Utah, and clashes between church and federal interpretation of the law became frequent. Stories of Mormon violence toward non-Mormon settlers circulated in the East, and antagonism, much of it based on misunderstanding, grew out of proportion.

In 1857 a state of substantial rebellion was declared by the federal government; Young was removed from his post, and President James Buchanan directed U.S. army troops to proceed against the Mormons. The Mormons prepared for warfare, calling in outlying settlers, and guerrilla bands harassed the westward-bound troop supply trains of Albert S. Johnston. The affair, known as the Utah War or the Mormon campaign, was finally settled peacefully, but great ill feeling had developed, particularly after the massacre at Mountain Meadows. Some settlers who during the disturbances had traveled to land south of the Utah Valley remained to spread colonization there.

This turbulent episode was followed by several difficult decades. Congress passed acts forbidding polygamy in 1862, 1882, and 1887. In the attempt to enforce them, civil liberties were infringed upon and some Mormon church properties were expropriated. In 1890 a church edict advising members to abstain from the practice of polygamy was ratified, and civil rights and church properties were restored.

Statehood and the End of Isolation

Long before Utah became a state in 1896, its area had been reduced to its present size by the creation of the Nevada and Colorado territories in 1861 and the Wyoming Territory in 1868. The influx of settlers included many non-Mormon groups, and cultural and economic isolation was largely ended by the development of mining as well as by the completion of the Union Pacific Railroad, which in 1869 joined the Central Pacific Railroad northwest of Ogden, completing the nation's first transcontinental railroad.

Agriculture was long hampered by an 1880 court ruling favoring a concept of water as private property. Not until the Reclamation Act of 1902 was the principle of water as public property restored, reinforced by state legislation in 1903 vesting ownership of water in the state. World War II spurred industrial growth, and the development of hydroelectric power during the 1950s attracted new industries. The federal government, which owns over 60% of Utah's land, has become one of the state's largest employers, at both military and civilian facilities. Computer-software and other high-technology firms have recently given the state a diversified and robust economy.