Rhode Island is a state of the northeast United States on the Atlantic Ocean. It was admitted as one of the original Thirteen Colonies in 1790. Rhode Island was settled by religious exiles from Massachusetts, including Roger Williams, who founded Providence in 1636. It was granted a royal charter in 1663 and after the American Revolution began the industrialization that is still a major part of the state's economy. Providence is the capital and the largest city. Population: 1,070,000. 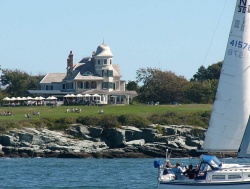 The region of Rhode Island was probably visited (1524) by Verrazano, and in 1614 the area was explored by the Dutchman Adriaen Block. Roger Williams, banished (1635) from the Massachusetts Bay colony, established in 1636 the first settlement in the area at Providence on land purchased from Native Americans of the Narragansett tribe. In 1638, Puritan exiles bought the island of Aquidneck (now Rhode Island) from the Narragansetts. There they established the settlement of Portsmouth (1638). Because of factional differences, Newport was founded (1639) on the southwest side of the island, but the two towns later combined governments (1640–47). Another settlement, Warwick, was made on the western shore of Narragansett Bay in 1642. In order to thwart claims made to the area by the Massachusetts Bay and Plymouth colonies, Williams, through influential friends, secured (1644) a parliamentary patent under which the four towns drew up a code of civil law and organized (1647) a government. The liberal charter granted (1663) by Charles II of England ensured the colony's survival, although boundary difficulties with Massachusetts and Connecticut continued well into the 18th cent. The early settlers were mostly of English stock. Many were drawn to the colony by the guarantee of religious freedom, a cardinal principle with Williams, confirmed in the patent of 1644 and reaffirmed by the royal charter of 1663. Jews settled in Newport in the first year of Williams' presidency (1654), and Quakers followed in large numbers. All the early settlers owned land that, following Williams' practice, was bought from the Native Americans. Fishing and trade supplemented the living won from the soil. Moreover, livestock from the Narragansett county (South County), especially the famous Narragansett pacers, figured largely in the early commerce, which developed rapidly in the late 17th cent. Because of the colony's religious freedom, it was viewed with mixed loathing and fear by the more powerful neighboring colonies and was never admitted to the New England Confederation. However, it bore its share of the devastation caused by King Philip's War in 1675–76. Between 1750 and 1770 there was bitter strife between Providence and Newport over control of the colony.

The Coming of Revolution

Until the American Revolution, Newport was the commercial center of the colony, thriving especially on the triangular trade in rum, slaves, and molasses. Rhode Island, like other colonies, objected to British mercantilist policies and consistently violated the Molasses Act of 1733 and the Navigation Acts. Narragansett Bay became a notorious haven for smugglers, and the British revenue cutter Gaspee was burned (1772) by patriots in protest against the enforcement of revenue laws. After the start of the American Revolution, Rhode Island militia under Nathanael Greene joined (1775) the Continental Army at Cambridge, and on May 4, 1776, the province renounced its allegiance to George III. British forces occupied parts of Rhode Island from 1776 to 1779, when they withdrew before the arrival of the French fleet. The Revolution won, Rhode Island, jealous of its independence, refused to sanction a national import duty; it therefore deprived the Continental Congress of a major source of revenue and became one of the states responsible for the failure of the Articles of Confederation. Rhode Island did not send delegates to the Constitutional Convention at Philadelphia and resisted ratifying the Constitution until the federal government threatened to sever commercial relations with the state; even then, ratification passed (1790) by only two votes.

The post-Revolutionary era brought bankruptcy and currency difficulties. Shipping, which continued to be a major factor in the state's economy until the first quarter of the 19th cent., was hard hit by Jefferson's Embargo Act of 1807 and by the competition from larger ports such as New York and Boston. However, this post-Revolutionary period also marked the beginning of Rhode Island's industrial greatness. Samuel Slater built the first successful American cotton-textile mill at Pawtucket in 1790. An abundance of water power led to the rapid development of manufacturing, in which merchants and shipping magnates invested their capital. With the growth of industry the towns increased in population, and Providence surpassed Newport as the commercial center of the state. Since suffrage had long been restricted to freeholders, Rhode Island's increased urbanization resulted in the disenfranchisement of most townspeople. Frustrated in repeated attempts to amend the constitution, many Rhode Islanders joined Thomas Wilson Dorr in forcibly establishing an illegal state government in Providence in 1842. Dorr's Rebellion, though abortive, resulted in the adoption of a new constitution (1842) extending suffrage; however, the property qualification was not abolished until 1888. Antislavery sentiment was strong in Rhode Island, and the state firmly supported the Union in the Civil War.

Until well into the 20th cent. Rhode Island's political and economic life was dominated by mill owners. (Nelson W. Aldrich was a power in the nation as well as the state.) The small mill towns, with their company houses and company stores and their large numbers of foreign-born residents, were important elements in the social fabric. English, Irish, and Scottish settlers had begun arriving in large numbers in the first half of the 19th cent.; French Canadian immigration commenced around the time of the Civil War; at the end of the 19th cent. and the beginning of the 20th there was a large influx of Poles, Italians, and Portuguese. Politically, Rhode Island was generally controlled by Republicans until the 1930s, when the Democrats' insistence on reapportionment of representation (which tended to favor small towns over urban areas) helped bring their party into power. Sporadic labor troubles in the 19th cent. had little effect on the state's economy. However, after World War I there was a long textile strike, centered in the Blackstone valley; this, together with the gradual removal of the mills to the South—the source of the cotton supply where labor was cheaper—led to a continuing decline in the cotton-textile industry. Nevertheless, the manufacture of textile products is still carried on in the state today and new industries such as high-technology electronics have been introduced. Since the 1970s the overall shift in the state's economy has been away from manufacturing altogether and toward the service sector. This shift has coincided with major suburban growth.