Kakuro puzzles have a grid similar to crosswords and, like sudoku, use only the numbers 1-9.

Kakuro, and sudoku, may have had their origins in magic squares. A magic square is a square array of integers in which the rows, columns, and diagonals have the same sum. Magic squares are one of the oldest mathematical puzzles and have been known since at least medieval times.

Both sudoku and kakuro may share some history as first put forth by Leonard Eular, a Swiss physicist, in a paper in 1783 showing how to construct magic squares with a certain number of cells. He referred to this as a Latin square because he used Roman numerals.

As with our crossword and Pathway grids, a kakuro puzzle grid is first created then tested to determine if the grid design is successful or needs revision. A kakuro grid may be square, rectangular, triangular, round, or any shape that lends itself to be an interesting (and solvable) puzzle.

The level of difficulty within a grid is determined during its construction. Some kakuro puzzles may seem difficult when one first looks at the grid, but in reality the puzzle may be quite easy. And vice versa.

Here is an example of an easy kakuro puzzle: 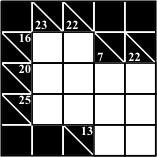 Kakuro puzzles are available for free download from our web site. Please contact our sales department for commercial kakuro puzzles.

To market your product or service through Punzhu Puzzles please contact our advertising department here.