Delaware is a state of the eastern United States on the Atlantic Ocean. It was admitted as the first of the original Thirteen Colonies in 1787. Settled by the Dutch in 1631 and by Swedes in 1638, the region passed to England in 1664. It was part of William Penn's Pennsylvania grant from 1682 until 1776. Dover is the capital and Wilmington the largest city. Population: 843,000. 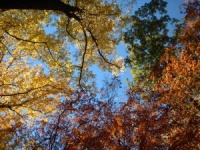 Long before Europeans explored the Delaware area, it was inhabited by several Native American groups of the Delaware—notably the Nanticoke in the south and the Minqua in the north. In 1609, Henry Hudson, in the service of the Dutch East India Company, sailed into Delaware Bay. A year later the British captain Sir Samuel Argall, bound for the colony of Virginia, also sailed into the bay. Argall named one of the capes Cape La Warre after the governor of Virginia, Thomas West, Baron De la Warr.

From the time of its discovery, the region was contested by the Dutch and English. The first settlement was established by Dutch patroons, or proprietors, in partnership with the Dutch navigator David Pietersen de Vries; it was called Swanendael and was established (1631) on the site of the town of Lewes. However, within a year it was destroyed by a Native American attack. This attack notwithstanding, the Native Americans were generally friendly and willing to trade with the newcomers.

The Dutch West India Company, organized in 1623, was more interested in trade on the South River, as the Delaware was called at that time, than in settlement (the North River was the Hudson, in the Dutch colony of New Netherland). Several Dutchmen, interested in settling the area, put their services at the disposal of Sweden and colonized the area for that country. The best known of these was Peter Minuit, who had been governor of New Amsterdam (later New York). In 1637–38 Minuit directed the colonizing expedition for the Swedes that organized New Sweden. Fort Christina was founded in 1638 on the site of Wilmington and was named in honor of the queen of Sweden. The colony grew with the arrival of Swedish, Finnish, and Dutch settlers.

English colonists from Connecticut tried to establish trading posts in the Delaware River region and failed, but Dutch interests in the area were not disposed of as easily. Peter Stuyvesant, governor of New Netherland, sailed to the Delaware region in 1651 and established Fort Casimir on the Delaware shore at the site of present-day New Castle. The Swedes captured the fort by surprise in 1654, but their triumph was brief; Stuyvesant returned with an expedition in 1655 and conquered all New Sweden. The Dutch West India Company sold part of New Sweden to the Dutch city of Amsterdam in 1656 and the rest in 1663.

In 1664 the English seized the Dutch holdings on the Delaware. The Dutch recaptured the colony in 1673 and although they held Delaware only briefly, they set up three district courts that marked the beginning of Delaware's division into three counties. The colony was returned to England in 1674 and remained in its hands until the American Revolution.

The English Duke of York (later James II) annexed the region to New York, land granted him earlier by Charles II. In 1682 the duke transferred the claim to William Penn, who wanted to secure a navigable water route from his new colony of Pennsylvania to the ocean. The three counties of Delaware thus became the Three Lower Counties (or Territories, as Penn called them) of Pennsylvania. The individual counties were called New Castle, Kent (formerly St. Jones), and Sussex (formerly Hoornkill, also known as Whorekill, and Deale). The English proprietors of Maryland contested Penn's claim to Delaware, and the boundary dispute was not fully settled until 1750.

The inhabitants of the Delaware counties were at first unwilling to be joined to the radical Quaker colony of Pennsylvania or to have their affairs settled in Philadelphia. They finally accepted the Penn charter of 1701 after provisions were added giving the Three Lower Counties the right to a separate assembly, which first met in 1704. Delaware maintained quasi-autonomy until the American Revolution. The two colonies maintained strong ties, however, and two of Delaware's leading statesmen during the Revolution—Thomas McKean and John Dickinson—were also prominent in Pennsylvania affairs.

Although there were many Loyalists in Delaware just prior to the American Revolution, Delaware supported independence, with two of its three delegates to the Continental Congress—Caesar Rodney and Thomas McKean—voting for independence. George Read, the third Delaware delegate, voted against independence, fearing that Loyalist sentiment was too strong in the colonies. However, Read subsequently signed the Declaration of Independence.

In 1776 the colony of Delaware became a state, with a president as its chief executive. Regiments from the state rendered valiant service to the patriot cause, especially the Delaware 1st Regiment, which was nicknamed the Blue Hen's Chickens—originally because they carried with them gamecocks bred by a famous hen of Kent and later because they themselves showed the fighting quality of gamecocks. Delaware was a leader in the movement for revision of the form of government under the Articles of Confederation and in 1787 became the first state to ratify the new Constitution of the United States. The state constitution of 1776 was superseded by a new constitution in 1792, which provided that the chief executive be a governor rather than a president.

The late 18th cent. also marked the beginning of industry in Delaware with the establishment of gristmills on the Brandywine and Christina rivers. Wilmington became a center for the manufacture of cloth, paper, and flour—products that helped to build the industrial economy of N Delaware that flourished in the 19th cent. Shortly thereafter, in 1802, Eleuthère Irénée Du Pont established a gunpowder mill on the Brandywine River.

Prior to the Civil War, Delaware was a slave state, but in the early 19th cent. the number of slaves in the state declined, while the number of free blacks increased. Many citizens of Delaware favored manumission of slaves and belonged to the American Colonization Society, but there were few who sympathized with the growing abolitionist movement and there was strong sentiment for separation of whites and blacks. In the Civil War, Delaware remained loyal to the Union, but pro-Southern feeling increased rather than diminished during the course of the war. Delaware refused to accept an emancipation proposal made by Lincoln in 1861 and did not ratify the Thirteenth, Fourteenth, and Fifteenth amendments to the U.S. Constitution until 1901. Delaware Democrats subsequently became divided, and the Republican Party emerged in 1905 to assume a leading political role for some years.

A new state constitution in 1897 reflected the political strength as well as conservatism of Delaware's farmers through provisions that kept the political strength of Wilmington at a minimum and that of rural areas at a maximum. Many European immigrants came to the state in the late 19th and early 20th cent., settling in the Wilmington area. Southern Delaware's population continued to be made up largely of African Americans and persons of English origin.

Delaware's industries flourished during the 19th cent. as transportation facilities improved. Industry continued to expand in the 20th cent., especially during World Wars I and II. The chemical industry built up by the Du Pont family was broken up by a federal antitrust suit in 1912, but was nonetheless large enough to buy control of General Motors corporation in the 1920s and hold it for many years.

Racial tensions appeared in the state in the 1950s and 60s as Delaware's schools were racially integrated, and after the assassination of Martin Luther King in 1968, rioting erupted in Wilmington. In the 1980s, Governor Pierre S. Du Pont fought to liberalize the state's usury laws and won. As a result, many large New York banks set up subsidiaries in Delaware (especially the Wilmington area), and thousands of jobs were created.