Croatisation is a term used to describe a process of cultural assimilation, and its consequences, in which people or lands ethnically partially Croat or non Croat become voluntary or forced Croat. 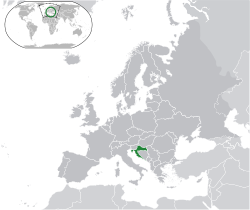 Serbs have been victims of Croatisation throughout history.

A large part of the Habsburg unit of Uskoks, who fought a guerilla war with the Ottoman Empire were ethnic Serbs (Serbian Orthodox Christian) who fled from Ottoman Turkish rule and settled in Bela Krajina and Zumberak.[1][2][3][4]

Serbs of Croatia in the Roman Catholic-Croatian Military Frontier were out of the jurisdiction of the Serbian Patriarchate of Peć and in 1611, after demands from the community, the Pope establishes the Eparchy of Marca (Vratanija) with seat at the Serbian-built Marca Monastery and instates a Byzantine vicar as bishop sub-ordinate to the Roman Catholic bishop of Zagreb, working to bring Serbian Orthodox Christians into communion with Rome which caused struggle of power between the Catholics and the Serbs over the region. In 1695 Serbian Orthodox Eparchy of Lika-Krbava and Zrinopolje is established by metropolitan Atanasije Ljubojevic and certified by Emperor Josef I in 1707. In 1735 the Serbian Orthodox protested in the Marča Monastery and becomes part of the Serbian Orthodox Church until 1753 when the Pope restores the Roman Catholic clergy. On June 17, 1777 the Eparchy of Križevci is permanently established by Pope Pius VI with see at Križevci, near Zagreb, thus forming the Croatian Greek Catholic Church which would after World War I include other people; Rusyns and Ukrainians of Yugoslavia.[3][4]

Croatia in the Austro-Hungarian Empire 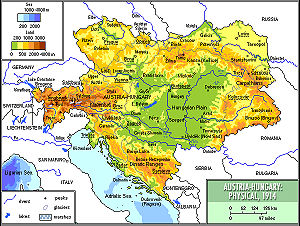 In the early 19th century, Croatia was a part of the Habsburg Monarchy (later known as Austro-Hungarian Empire). As the wave of romantic nationalism swept across Europe, the Croatian capital, Zagreb, became the centre of a national revival that became known as the Illyrian Movement. Although it was initiated by Croatian intellectuals, it promoted the brotherhood of all Slavic peoples. For this reason, many intellectuals from other Slavic countries or from the minority groups within Croatia flocked to Zagreb to participate in the undertaking. In the process, they voluntarily assumed a Croatian identity, i.e., became Croatised, some even changing their names into Croatian counterparts and converted to Roman Catholicism, notably the Serbs

The Croatisation during Independent State of Croatia (NDH) was aimed primarily to Serbs, with Italian, Jews and Roma to a lesser degree. The Ustase aim was a "pure Croatia" and the biggest enemy was the ethnic Serbs of Croatia, Bosnia and Herzegovina. The ministers announced the goals and strategies of the Ustaše in May 1941. The same statements and similar or related ones were also repeated in public speeches by single ministers as Mile Budak in Gospic and, a month later, by Mladen Lorkovic.[5]

Even with a predominant Croatian majority, Dalmatia retained relatively large Italian communities in the coast (Italian majority in some cities and islands, largest concentration in Istria). Italians in Dalmatia kept key political positions and Croatian majority had to make an enormous effort to get Croatian language into schools and offices. Most Dalmatian Italians gradually assimilated to the prevailing Croatian culture and language between the 1860s and World War I, although Italian language and culture remained present in Dalmatia. The community was granted minority rights in the Kingdom of Yugoslavia; during the Italian occupation of Dalmatia in World War II, it was caught in the ethnic violence towards non-Italians during fascist repression: what remained of the community fled the area after World War II. [6]

The history took its turn: while from 1919. - 1945. Italian Fascists stated by the proclamation that all Croatian and other non-Italian surnames must be turned to Italian ones (which they had chosen for every surname, so Anić became Anetti, Babačić Babetti etc.; 115.157 Croats and other non-Italians were forced to change their surname), the Italian community of Istria and Dalmatia were forced to change their names to Croats and Yugoslav, during Tito's Yugoslavia.[7][8]

The same happened - but with lower incidence - with Italians in Istria and Rijeka (Fiume) who were the majority of the population in most of the coastal areas in the first half of the 19th century, while at the beginning of World War I they numbered less than 50%.

After World War II most of the Italians left Istria and the cities of Italian Dalmatia in the Istrian-Dalmatian exodus.[9] The remaining Italians were forced to be assimilated culturally and even linguistically during Josip Broz Tito's rule of communist Yugoslavia.[10][11] Following the exodus, the areas were settled and heavily croatized with Yugoslav people.[11][12] Economic insecurity, ethnic hatred and the international political context that eventually led to the Iron Curtain resulted in up to 350,000 people, mostly Italians, forced to leave the region. The London Memorandum (1954) gave the ethnic Italians the choice of either leaving (the so-called optants) or staying. These exiles would have been to be given compensation for their loss of property and other indemnity by the Italian state under the terms of the peace treaties. Those opted to stay had to suffer a slow but forced croatisation.[13]

Some sporadic Croatization phenomena still took place in the last years of 20th century after Croatian Indipendency, despites many towns were declared bilingual by Croatian Law.[14][15]

During and prior to the war in Bosnia and Herzegovina

Following the establishment of the Croatian Republic of Herzeg-Bosnia in November 1991, and especially from May 1992 forward, the Herzeg-Bosnia leadership engaged in continuing and coordinated efforts to dominate and "Croatise" (or ethnically cleanse) the municipalities which they claimed were part of Herzeg-Bosnia, with increasing persecution and discrimination directed against the Bosniak population.[16] The Croatian Defence Council (HVO), the military formation of Croats, took control of many municipal governments and services, removing or marginalising local Bosniak leaders.[17] Herzeg-Bosnia authorities and Croat military forces took control of the media and imposed Croatian ideas and propaganda.[18] Croatian symbols and currency were introduced, and Croatian curricula and the Croatian language were introduced in schools. Many Bosniaks were removed from positions in government and private business; humanitarian aid was managed and distributed to the Bosniaks' disadvantage; and Bosniaks in general were increasingly harassed. Many of them were deported to concentration camps: Heliodrom, Dretelj, Gabela, Vojno, and Šunje.

A process of Croatisation (cultural assimilation) of the Republic of Ragusa's history (and in part the Kingdom of Dalmatia) began in the 19th century and this process is still continuing today. This process happened firstly in relation to the Ragusan-Slavic history and later with the Ragusan-Italianic history. In relation to this Croatisation of history, Gianfrancesco Gondola (1589 -1638) a Ragusan Baroque poet from Republic of Ragusa has become a Croatian Baroque poet called Ivan Gundulić from Dubrovnik, Croatia. Ivan Gundulic wrote many works in Italian and Slavic (today referred to as Croatian[20]).

One of these was the Slavic poem Osman. Interestingly, in 1967 his work was referred to as "The works of the greatest poet of early Yugoslav literature, Ivan Gundulić" taken from the book Dubrovnik by Bariša Krekić[21]

The ancient peoples of Dubrovnik identified themselves as Ragusans. Latin-Illyrian families created the Republic of Ragusa. Modern theories say that a small town was already there during the times of the Roman Empire (some say even earlier).[22]

Refugees from Roman Epidaurus in the 7th century turned it into a fortified city. Over the centuries, it became a City State importantly called Ragusa. Later it became a Republic (1358), also importantly called Republic of Ragusa. The early medieval City State had a population of Romans and Latinized Illyrians, who spoke Latin. With time it evolved into the Dalmatian language, a now extinct Romance language. The Ragusan Dalmatian language disappeared in the 17th century. For centuries Ragusa, was an Italian-City State.

In the 16th and 17th century [23][24] its ethnic population changed dramatically mainly due to various historical events in Europe. It became a hub of multi-ethnic communities. The most numerous of these were the Slavs. The peoples of the Republic started to merge (including mixed marriages). Additionally the Ragusan-Slavic population were Romanised, meaning they adopted Latin Mediterranean culture. A form of Italian was spoken in the Republic, which was heavily influenced by Venetian. Books were written in Latin and Italian. Some Ragusans started to write in a Slavic language. Two languages Italian and Slavic (which at times overlapped) became the norm in the Republic. 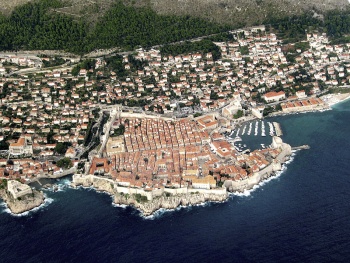 Dubrovnik once the capital of the Republic of Ragusa now within todays modern Croatia. The Republic in the past was a hub of multi-ethnic communities.

During the Napoleonic Wars the "Republic of Ragusa" ceased to be. In 1815 it was made a part of the Habsburg Empire (later renamed the Austro-Hungarian Empire). The former Republic was within the province of the Kingdom of Dalmatia and under Austrian rule. In essence it was occupied. Former Republic of Ragusa borders were opened up. Peoples who were once foreigners (even enemies), were now citizens of the Austro-Hungarian Empire.

The political situation stated to change and one of them was the nationalistic movement of the 19th century. In the neighbouring Kingdom of Croatia-Slavonia a Croatian nationalistic movement was established and alongside that, within the Balkan region a Pan-Slavic movement was growing (the beginnings of the ill fated Yugoslavia). These political on goings started to be felt in the Kingdom of Dalmatia. The Austrians in the 1860s started to introduce within the Kingdom of Dalmatia a standardised Croatian language sometimes referred to as Illirski.[26] It then replaced Italian altogether. In effect the government undertook culture genocide. For centuries the Italian language was the official language of the Dalmatian establishment. It was also the spoken language in white-collar, civil service and merchant families. [27]

The process of creating a standardised Croatian language was incomplete. This is reflected in its labelling of the language as Croatian, Croatian-Serbo and the very unpopular Serbo-Croatian. This was a fundamental mistake made when political extremist ideology influenced decision-making regarding language and culture. It was an attempt at imitating Western imperial empire building egotism (a super Southern Slav State), which failed. [28]