Difference between revisions of "Directory:Rebecca Latham"

Rebecca Latham, (born 1979), is a realist artist and painter based in Minnesota. She is best known for her detailed paintings of wildlife and nature [1] which has become popular worldwide. She is a blogger who communicates directly with viewers on her weblog[2] in which the artist shares her new paintings, news announcements, and articles. Her work has risen in popularity since she began as a teen, her original paintings hanging in private and corporate collections worldwide.

Growing up in a family drawn to the outdoors, Rebecca has always experienced a closeness to the natural world. With the supportive encouragement of her parents, and finding a talent in art, she chose to focus her future as a painter in her mid teens. The artist began earning numerous top honors in regional competition. in 1998, Rebecca was awarded runner-up in the US Fish and Wildlife Service's Federal Junior Duck Stamp program and was honored in Washington, D.C. for her achievement at the National Press Club, Smithsonian, Department of the Interior, and other locations as well as having her work included on the national tour.[3]

The artist participated in her first art expo in 2002 at the invitational "Florida Wildlife Exposition" in Lakeland, Florida, where she was awarded "best of show"[4].

Her rise to popularity as a young artist has brought interviews on the internet[5] as well as in print.

Early on in her career as an artist, Rebecca was reviewed by art market media to have an impact in the future of fine art prints, Generation Next[6] (2000), along with her sister, Bonnie Latham.

Her popularity as a woman artist included her in Wildlife Art Magazine's article, "Women Artists Tout Artistic Parity" (2002), along with her family[7]. Her artistic family has been highlighted in international magazines "The Lathams Live, Work, Paint Together" InformArt Magazine (2005); "Like Mother, Like Daughter" Sketchbook Magazine/F&W Publications (2005); Wildscape Magazine - "Get Up and Go!" (2006); and "A 24/7 Family Affair - All in the Family" Wildlife Art Magazine (2008).

In 2007, Rebecca was nominated for inclusion in the British publication, Who's Who in Art[8], by the Hilliard Society of Miniaturists[9].

Researching[10] the history of her genre. 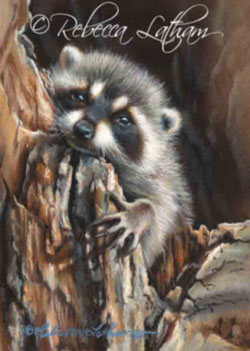 The artist is passionate about her art as well as the wildlife that is so predominate in her paintings. She works with organizations for environmental and conservation causes for wildlife. Rebecca and her family have donated numerous original paintings and prints for auction and raffle to support North American and international conservation organizations, Raptor rehabilitation centers, nature centers, Zoos, the Safari Club International, and wildlife rescue facilities that care for abused animals.

Rebecca has also performed quick draw paintings (pieces painted in minutes or several hours at an event) to raise thousands of dollars for worthy causes as well.

Her paintings have been featured on US and Canadian conservation stamps as well as featured in the Illinois habitat conservation print program and through Ducks Unlimited. She has also been involved with the USFWS Junior Duck Stamp program.

Additionally, just as Rebecca is dedicated to the preservation of wild lands and the wild creatures that depend on the existence of those places for their survival, the artist is also dedicated to the preservation of true traditional miniature painting in all it's forms, a type of art that has been practiced since early writing. The artist and her family, all working 'in miniature' in their painting, work to raise awareness and education of classic miniature art. The artist is also devoted to encouraging young artists.

Rebecca Latham's paintings art in the collections of The Butler Institute of American Art, the Illinois Department of Natural Resources, The Hartford, the Miniature Art Society of Florida Permanent Collection, and NatureWorks.

In 2004, Rebecca was invited to show her works in the World Federation if Miniaturists Exhibition at the Smithsonian's Ripley Center, Washington, DC[11]

In 2002, Rebecca was elected as a signature member of the Society of Animal Artists. The following year she was elected to the Artists for Conservation (then named The Worldwide Nature Artists Group). In 2008 The artist was invited to join the International Guild of Realism. She is a member of the The Allied Artists of America, Catharine Lorillard Wolfe Art Club, The Cecilia Beaux Forum, Portrait Society of America, American Watercolor Society, Untamed Artist Network, Miniature Painters Sculptors & Gravers Society of Washington, D.C., Hilliard Society of Miniaturists, The Wildlife Art Society International, Marwell International Wildlife Art Society, World Federation of Miniaturists, and Miniature Art Society of Florida.

Rebecca uses watercolors on a variety of surfaces to create her paintings. The artist's work is influenced by Vermeer, Carl Brenders, and Raymond Harris Ching[16]