Kansas is a state of the central United States. It was admitted as the 34th state in 1861. Organized as a territory by the Kansas-Nebraska Act of 1854, it became a virtual battleground, known as Bleeding Kansas, for free and slave factions (1854-1859). Kansas was finally admitted as a free state. Topeka is the capital and Wichita the largest city. Population: 2,740,000. 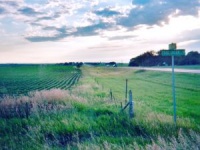 Kansas is rich with history. In fact, Kansas' history predates statehood and even that of the United States. From the first documented traveler, over 400 years of trials, tribulations, and triumphs have helped mold Kansas into the vibrant, prosperous, rich State we know today.

In 1540, Coronado found his way to Kansas near the present-day Lindsborg, as he was exploring the “new world” in search of gold. But, what he did find was land which he viewed as “the best that I have ever seen for producing all the products of Spain”.

Although Coronado is believed to be the first traveler to Kansas, the Native Americans were the first inhabitants. Eight Indian Tribes lived in Kansas before the coming of the white man. They included the Kansas, Osage and Pawnee. They lived in small villages and hunted buffalo, raised corn, beans and squash. There were many reasons why Native American nations came to this land. Much like the Kansas we know today, they saw great opportunity in moving here. Buffalo as far as the eye could see roamed the prairies; the fecund soil was perfect for growing crops; the many rivers and streams provided enough of a water supply to settle and live peaceful, stationary lives.

In 1719, French adventurers claimed the region for France. They came to trade with the Indians. They built Fort Orleans near the mouth of the Osage River in 1724. Kansas warriors destroyed the fort a year later. In 1762 France ceded the Louisiana territory to Spain. In 1800, the Treaty of Madrid gave the land back to France.

In 1809 the United States acquired the land including Kansas in the Louisiana Purchase. The southwest corner of the state was acquired from Texas in 1850.

In 1812 Missouri became a state excluding the area of Kansas. In 1825, the federal government made Kansas Indian territory. From 1825 to 1840, nearly 30 tribes gave up land and moved to the Kansas territory, including the Shawnee, Delaware, Chippewa, Iowa, Wyandotte, and Kickapoo. In 1827, Col. Henry Leavenworth established Kansas' first white settlement.

The exploration of the western half of the United States probably can be considered the most important event in the development of Kansas. As the highly populated east coast began to crowd and promises of new world success diminished, people followed the stories of opportunity and prosperity west. Thus, the Santa Fe and Oregon Trails opened and acted as a river of hope flowing to the Pacific Ocean. As pioneers followed dreams and fled hardship, they found Kansas to be the best of all worlds. For in Kansas, people could settle their families on wide open, farmable land, escape societal and religious persecution, and begin to live their dreams.

Unfortunately, the pioneers didn't find themselves free of all trouble. As more and more settled, disputes arose among Native Americans and settlers, and settlers themselves. There just wasn't enough of this great land to go around. A solution was to build forts to keep the peace and protect travelers. As a result, towns like Fort Leavenworth and (Fort) Hays were established.

In the 1840's, Kansas lay in the path of the settlers rush to Utah and California. Some pioneers, seeing the agricultural promise of Kansas, settled here instead. Treaties with the Indians were made and broken and in 1858, gold discoveries in Colorado brought a rush of settlers through the reservations in the western part of the state. Angry indians made many raids and uprisings that lasted until 1878.

In 1854, President Pierce signed the Kansas-Nebraska act which created the Territory of Kansas. The boundaries included much of Colorado, as well as what is now known as Pikes Peak. It also provided that regional settlers would determine if the state were to be free or slave. Bitter battles between the factions gave the name "Bleeding Kansas" to the territory. An election in 1855 decided for the slavery forces. Angry "Free Staters" met in Topeka and set up a rival government but the U.S. refused to recognize that government.

Lawrence was attacked and ransacked in 1856 because pro-slavery forces wanted to put an end to Lawrence residents' harboring of slaves. Retaliatory efforts were led by John Brown, his sons, and others. These led to the Battle of Black Jack, where several hundred slave-state Missourians avenged Brown's actions. Osawatomie was almost completely destroyed in a later encounter between Brown and the Missourians.

The implication concerning whether or not Kansas should become a slave state was a far-reaching one. There was such a delicate balance of opinion that it took four attempts at writing a constitution for ratification by Congress. The battle raged on often needing the intervention of Federal Troops. In 1859, the people of Kansas approved a constitution prohibiting slavery. The population was 107,206 at that time. In April of 1860 the Kansas constitution was approved by the House of Representatives, but was refused by the Senate which was under a pro-slavery majority. Because of the Senate's refusal to admit Kansas as a state, the issue erupted into a national political issue. In order to be admitted, there had to be a substantial shift in power in the Senate and the presidency.It wasn't until January 29, 1861, that the bill making Kansas the 34th state reached President James Buchanan's desk and was signed.

If Kansas had a victory entering the United States as a free state, then their contribution to the Civil War effort helped provide a victory to all of America. All told, over 20,000 Kansans fought on behalf of freeing the Union—two-thirds of the fighting-age male population at that time. Most of these soldiers fought elsewhere; however, one major Civil War battle in Kansas was the Battle of Mine Creek in 1864. Had this battle been won by the Confederacy, Kansas' infant existence as a free state would have been in jeopardy.

The Civil War ended, violence ceased, and a rebuilding process began in other states. Unfortunately, for Kansas, violence continued as white settlers moved in and encroached upon the territory of Native Americans. Even though forts on the plains continued to provide protection for settlers, many raids and mini-battles were fought, reaching an apex in 1867 when nearly 130 settlers were killed. Native American-Settler skirmishes waned in the latter half of the 1860's.

The postwar advent of the railroad into Kansas made the state a popular destination for cattle drives in the cowtown era of the late 1860s and early 1870s -- an era that has lasted far longer in romantic western fiction than it ever did in historical fact. Still, some legends of the Old West roamed these plains -- Buffalo Bill Cody, Wild Bill Hickock, the Dalton Gang, Gen. George A. Custer and Annie Oakley.

In 1874, Mennonite settlers arrived, bringing with them a strain of Turkey Red wheat that found fertile soil in the Kansas plains and led to its present-day claim as "The Wheat State." As the railroads and cattlemen moved on, the wheat farmers moved in and transformed Kansas from a rowdy Wild West locale to a rural, agricultural-dependent environment.

But it was not so bucolic that a few other characters couldn't stir the national imagination. Not the least among them was Carry A. Nation (her real name; born Carry Amelia Moore, she married David Nation), the fiery, hatchet-wielding temperance advocate of the 1890s who would descend on Kansas saloons to smash the fixtures and censure the patrons.

Many pockets of European culture, such as the Swedes in Lindsborg and Czechs in Wilson, thrive today.

Meanwhile, Kansas continued to grow and develop. Schools, farms, and main streets cropped up all over the State. Railroads paved the way for the further proliferation of modernization. People could travel and transport goods and services more easily, resulting in the establishment of towns like Wichita, Dodge City, and Newton. The great prairie enabled Kansas to establish the country's eminent cattle industry. And, the farmland that attracted Indians and impressed Coronado earned Kansas the nickname—the Wheat State.

The dominance of agriculture and the demands for food created by World War I led to more and more Kansas prairie being plowed under for production, which led to prosperity in the 1920s. But that was a direct contributor to the Dust Bowl devastation of the 1930s.

Modern agricultural practices, derived from lessons of the Dust Bowl, have revolutionized farming. Today, both wheat and beef are major products of Kansas, as are airplanes and oil.

Through the 20th century, Kansas has contributed several major figures to the national political scene, including Dwight D. Eisenhower, the supreme commander of allied forces in Europe during World War II and later the 34th U.S. president. Kansas has produced two other presidential candidates who captured the Republican nomination in Alf Landon (1936) and Bob Dole (1996).

In this century Kansas has changed from being primarily a cattle and wheat state to a thriving industrial and agricultural state. As the center of the 48 contiguous states, Kansas has proven to be an attractive location for many companies serving national and international markets. Technology advanced, enabling planes to fly and trains to run on diesel instead of steam. In the early 20th century, Kansas began what is now the greatest airplane producing center in the world. More efficient farm equipment helped make Kansas the largest exporter of wheat, and energy drawn from its oil wells helped power a nation. Kansas has never been free of adversity. Throughout its proud, yet difficult history, the citizens of this state have fought for prosperity and success.