Wikia (originally "WikiCities") was co-founded in 2004 by Wikipedia co-founder Jimmy Wales and Angela Beesley. They hoped to capitalize financially on the working model presented by Wikipedia. In fact, it has been said that Wales' ambition was to take the success of Wikipedia and "commercialize the hell out of it."

As recently as September 2006, eighty percent of the Wikimedia Foundation board of trustees seats were dedicated to high-ranking Wikia employees and a co-founder of Bomis.com, Jimmy Wales' prior business venture. This is why even BBC News calls Wikia "the for-profit sister site of Wikipedia". 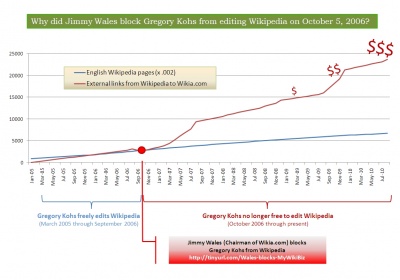 The only period when external links from Wikipedia to Wikia were in decline were the two months prior to October 2006. Immediately after Jimmy Wales blocked one of his leading critics from Wikipedia, the link expansion continued unabated.

In the early part of 2007, Wales upped the ante and ordered that all external links from Wikipedia to outside sites should be hampered by a "nofollow" tag that would eliminate them from most search engine algorithms. Wales claimed that he made this decision on guidance from "Google and others". However, there was an exception to this new "nofollow" rule -- inter-wiki links, including many that pointed to Wikia.com, would still get treated as "do follow" links, which was a significant benefit to Wales' for-profit site and brought a rousing criticism from the tech media.

By December 2009, there were over 21,300 external links from Wikipedia to Wikia.com sites -- sites funded by Google AdSense and other advertising revenues, with not a dime going back to the crowd-sourced contributors. By November 2010, that number had risen to 24,870 links from Wikipedia, an increase of 16.8% in less than a year. (Note, during that time period, Wikipedia article growth clocked in at 8.5%. So, the rate of increase in Wikia-bound links from Wikipedia outpaces by 98% the rate of increase in natural Wikipedia growth.) By the beginning of 2013, Wikipedia hosted over 34,100 external links to Wikia.com sites, which represents over 800 links to Wikia per 100,000 Wikipedia articles -- one of the highest ratios of any external website. Of course, the more links, the more traffic; and the more traffic, the more money in Jimbo Wales' pocket.

Wikia was the Wikimedia Foundation's landlord

They [the Wikimedia Foundation] approached us and asked if they could rent space on a temporary basis.. and I think it ended up being 4-6 months give or take. I thought about giving it to them for free and I wasn't sure which was worse... getting accused of bribing a non-profit for giving it away, or getting accused of stealing for a non-profit for charging... so we ended up asking them to get competitng (sic) quotes from other landlords so that THEY could feel comfortable with the decision.

The facts clearly show that a request to rent space was delivered to a hand-picked bidder, and only then was a suggestion made to get competing bids from other landlords. It sounds like someone at the Wikimedia Foundation wanted to make sure that Jimmy Wales' for-profit company had the inside track on that bid, worth many thousands of dollars. This scenario quite frankly describes a failure in ethical accountability.

Wikipedia as a staffing source for corrupt Wikia employees

A wave of problems began with a decision by Jimmy Wales to hire a 24-year-old college dropout named Ryan Jordan to work at Wikia. The hiring decision was made, even though Wales apparently knew Jordan had been passing himself off to the Wikipedia community (and to The New Yorker magazine's Pulitzer Prize winning Stacy Schiff) as a tenured professor holding multiple advanced degrees. Further aggravating the issue, Jordan (whose Wikipedia screen name was "Essjay") was soon appointed by Wales to the highest volunteer adjudicating body within Wikipedia -- the Arbitration Committee. So, this was another instance of a Wikia, Inc. employee holding an exclusive position of power on Wikipedia.

When The New Yorker outted Ryan Jordan's academic fraud, their editors contacted Jimmy Wales for comment. Wales was quoted with the now infamous, "I regard it as a pseudonym and I don’t really have a problem with it." This set off a firestorm of criticism, both within Wikipedia and external to the world's largest encyclopedia community. Especially damaging seemed to be the numerous administrative cover-ups that attempted to hide the historical wiki record of Essjay's actions and the community debates that followed.

Probably not coincidentally, the Essjay / Wikia scandal of March 2007 about exactly matches the month when Wikipedia began to see a marked decline in active editors that has not reversed itself since.

Despite all these connections, Jimmy Wales nonetheless has the audacity to declare on his Wikipedia user page that "Wikia [is] a completely separate organization, unrelated to Wikipedia and the Wikimedia Foundation."

In late 2010, the Wikia company forced a new format and style called Oasis on all of its wiki communities. Many of the leading members of these communities were so outraged by the lack of space for content and the lack of customization left to wiki hosts, they formed an Anti-Wikia Alliance and began defecting with their content to new domains that they would host themselves. Even one of Wikia's top wikis, the one that supports the "World of Warcraft" community, has dumped Wikia for a new site, Wowpedia.org. Even as 90% of the contributor base had already left, Wikia was not beneath trying to bribe anyone remaining to stay. Wikia took another hit as a large portion of the Uncyclopedia community abandoned Wikia for a fork, currently hosted at uncyclopedia.co.