Indiana is a state of the north-central United States. It was admitted as the 19th state in 1816. The area was controlled by France until 1763 and by Great Britain until 1783. The Indiana Territory was formed in 1800. Indianapolis is the capital and the largest city. Population: 6,270,000. 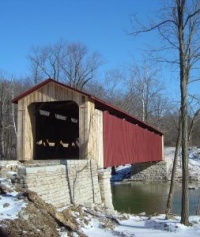 Native American Indians migrated west into Indiana as European settlers took their lands during the late 1600s. The Shawnee, Miami, Delaware, Mahican, and Potawatomi tribes were just a few of these tribes.

In 1679, French-Canadian Robert Cavelier became the first white man to see Indiana. He was searching for a water route to the Pacific Ocean. French fur traders soon followed, establishing trading posts throughout the area. Forts were built during the 1720s in Miami (near Fort Wayne) and Quiatenon (near Lafayette). Vincennes became the first permanent settlement in Indiana about 1732.

The region figured importantly in the Franco-British struggle for North America that culminated with British victory in 1763 and control of all land east of the Mississippi River, including Indiana. However British troops did not enter the Indiana region until 1777, during the Revolutionary War (1775-1783). George Rogers Clark of Virginia led American soldiers into Indiana to fight Britain and claim Indiana as American land. Their victory in 1779 of Fort Sackville in Vincennes, led to American control of the northwest. After the war, Indiana became part of the Northwest Territory in 1787.

Settlers from the British colonies on the American east coast began migrating west in the mid 1700s, seeking farmland. The American Revolution and the formation of the United States of America brought more demand for the lands of the west.

On Dec. 11, 1816, Indiana became the 19th state to join the union. The land which has become the state of Indiana, was once occupied by paleoindians 10-12 thousand years ago. Historic American Indian tribes also lived on this land, inspiring the state's name - Indiana, the land of Indians.

Indiana's state government is modeled closely to that of the federal government. There are three branches: the executive, the legislative and the judicial. The Governor is elected to serve a four year term. The legislature, known as the General Assembly, has two houses. Members of the House of Representatives are elected to terms of two years, and members of the Senate are elected to serve for four years. The judicial branch is comprised of the Supreme Court, the Court of Appeals, and local circuit courts. Nationally, Indiana is represented by two U.S. Senators and ten U.S. Representatives.

Indiana struggled financially after joining the union. Many of the farmers that bought land from the federal government did not have to pay taxes the first five years. Historically, Indiana has often been considered an agricultural state. In the years following statehood in 1816, manufacturing goods came mainly from household processes, from trades or crafts, and from mills. Milling became Indiana's first major industry, and meat packing, coal mining, limestone quarrying, boat construction, and the manufacture of farm equipment were early economic advances presaging later developments.

During the 1820s, the state received grants from the government to build roads and canals.

The economy improved in the 1850s, as railroad expansion linked Indiana to East coast markets. New industries were developed and several new businesses opened. In 1852, the Studebaker brothers opened a wagon shop in South Bend that became the largest wagon manufacturer in the nation.

Indiana sent food to help soldiers during the Civil War (1861-1865), but not much fighting occurred near Indiana. There were several inventions that led to new industries during this time. Richard Gatling of Indianapolis invented the machine gun in 1862. In 1885, the first gasoline pump was developed in Fort Wayne. Elwood Haynes of Kokomo developed the first successful gasoline-powered car in 1894.

Mining also became a big industry. Natural gas was discovered near Portland and oil near Keystone. In 1889, Standard Oil built one of the largest oil refineries in the world in Whiting. Nearby, United States Steel built its largest steel mill and founded the city of Gary. The automobile and other metal-product industries also greatly expanded. In 1911, the Indianapolis Motor Speedway held the first Indianapolis 500 car race.

During the 1950s, Indiana's economy continued to change from agricultural to industrial. New farm equipment replaced many of the workers, who were left to find jobs in the city. Clifty Creek, one the nation's largest power plants, was built in Madison in 1956.

Indiana's state government increased taxes in 1973 and during the mid-1980s to help meet rising social needs. Unemployment increased due to foreign competition in the automobile industry. Farmers also experienced a depression in their industry. Indiana is now striving to expand and renovate existing service industries while attracting new industries into the state

Early Indiana settlers had a great concern to preserve religious freedom, and many denominations have been cultivated here and contribute much to the makeup of Indiana life. Today, over 7000 churches can be identified serving about half of the current population.

Residents from even all walks of life have preserved their history and traditions through museums, libraries, archives, and publications. There are currently over 370 museums in Indiana which focus on a variety of subjects. There are more than 2,900 libraries throughout the schools, public, academic, institutional, and specialized. In the early twentieth century, Indiana received more Carnegie Libraries than any other state, totaling 164.

Indiana has also had it's share of successful writers. Studies have determined that the best-selling fiction by Indiana authors is ranked second only to New York authors in the period of 1895 to 1965.

Indiana's natural heritage has benefited from private and public attention over the years. In 1916, Indiana began its state park system under Richard Lieber, who became a leader in the national conservation movement. Indiana has 12 state forests, 9 reservoirs, 151 nature preserves, and 18 fish and wildlife areas to preserve its natural heritage. Private organizations help to preserve many natural areas in Indiana.

Indiana United States IN US