MyWikiBiz Dasha Astafieva is a model. She was selected to be Playboy's January 2009 Playmate of the Month. She is the 55th Anniversary Playmate. 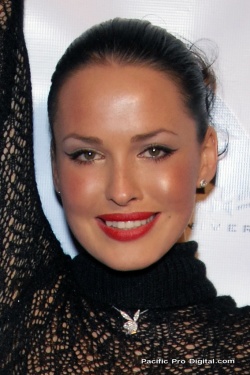 Dariia Astafieva started her model career when she was 18. Dariia worked as a model for 5 years. She had covers in XXL, Maxim, Max, Strongman etc. And she had contracts with such companies as Luciano Carvari, Paradise Club, Sobieski, Rica Lewis, Koktebel and she worked with many famous Ukrainian and foreign photographers such as Retrograd, Alexander Morderer, Dmitriy Peretrutov, Oleg Kosyrev, Dmitriy Filipov, Mihael Van Embe Boas, Stiven Waida, Petter Hegre. Her best beloved photographer is Kassandra, woman, who is a great photo artist. Her unforgettable and fantastic Dasha’s portraits became famous not only in Ukraine but abroad. Dariia visited such countries as Holland, Greece, Chezh Republic, USA, Lithuania. Dasha’s best beloved genre is nude photography. She posed for many magazines, but her greatest love was Playboy. “First I saw this magazine in my uncle’s room. I was 9. I decided to be as that covergirl”, - Dariia smiles. In 2006 Dasha first appeared on Playboy Ukraine’s pages as a girl of the month. And in 2007 she became a playmate of the year 2007 of Ukrainian version of magazine. She had a photo session in Crete, Greece. Later this photo session appeared in Playboy magazine in 25 countries. It was a real victory! And after that Hugh Hefner offered Dasha to come to Playboy Mansion to take part in competition for title Playboy’s 55th anniversary Playmate. Dasha is not only a successful model. She is also a successful singer in band “NikitA”. The genre of their music is pop-electro-sexy style. This band started in 2008, and now they have many fans, three videos and first album called “the Machine”.