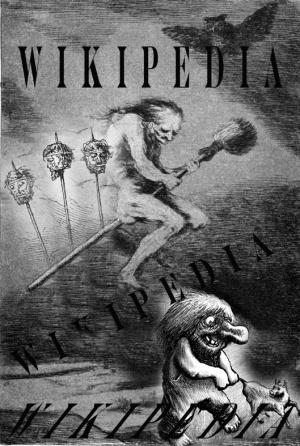 After Gwen Gale got her administrative tool she quickly turned the mop to a witch's broomstick. Now she uses this broomstick to fly around Wikipedia to collect heads of innocent editors while allowing trolls to troll. "The witch" was the name of one of Gwen Gale's sock accounts.

Gwen Gale is not the only bully administrator on Wikipedia. She's probably not the worst one either. She's one of hundreds of anonymous bullies with administrative tools that are allowed to roam free in Wikipedia's jungles.

Below is a real request concerning Gwen Gale. This request was filed on one of Wikipedia sites, and it was deleted with no action taken. Read it and decide for yourself.

Making of a bully or Gwen Gale's Wikipedia's story

In December of 2005 she was banned from the articles involving sexuality. The ban was stated like this "Wyss is banned from making any edit related to a person's alleged homosexuality or bisexuality. The clauses "any edit" and "related to homosexuality or bisexuality" shall be interpreted broadly; this remedy is intended, for example, to prohibit correcting the spelling of "gay"." There are hard on-wiki evidences she evaded her ban on a few occasions.

In December of 2005 just a few days before the imminent ban was imposed Gwen Gale made a sock account The Witch. A month later The Witch was discovered and identified as a sock and as a vandal. She failed to disclose The Witch in her RfA. After she was specifically asked about this account, she lied:"For about 24 hours, two years ago, yes. I quickly decided User:The Witch was an unhelpful username so I went back to User:Wyss. You will please note the account wasn't used to evade the arbcom ruling. I don't consider this brief experiment relevant but I'll be happy to answer questions about it." BTW Fred Bauder had the right to call The Witch "a vandal". Here are two examples taken from The Witch's contributions:

Gwen Gale failed to mention her The Witch account in her statement, when she unsuccessfully tried to get elected to ArbCom.

All histories of talk pages of users Wyss and The Witch were deleted by Fred Bauder in a violation of basic Wikipedia policies and with no explanation. There's no doubt that this deletion that removed some of Gwen's Gale rhetoric was very useful to her in becoming an administrator.

Here are only two examples of Gwen Gale's rhetoric that somehow survived outside her other accounts talk pages:

Gwen Gale's reaction on being blocked

I would have missed on this, if Gwen Gale's behavior as a blocked user versus a blocking administrator were not so drastically different. So let's see a few survived examples of Gwen's reaction on being blocked. These could be compared to the examples I will provide below that will demonstrate Gwen's bullying reaction to the comments of the editors she blocked.

Here is her reaction after 24 hours block for violating of her topic ban on editing articles referring to people's homosexuality: Your block was a misinterpretation of both the arbcomm ruling and its present status. You have been manipulated, at best. The wording of the block notice was equivalent to harassment. I was unable to edit my own talk pages or send emails to admins during the time my block was in force. This represents further negligence on your part and was a violation of Wikipedia policy. The block notice itself was ineptly formatted and represents further negligence. Finally, I find your user signature both disruptive and deceptive since it hides your true user name. In the future, please sign your posts in the normal way, with four tildes. If you wish to communicate with me further concerning these matters, please do so only via the email link on my user page. Thanks. Wyss 21:05, 4 March 2006 (UTC)

Here is her reaction for 24 hours block for edit warring "Too many trolls and fools after all, I guess There are too many of them for me here, too many role-playing troll admins, too many troll sockpuppet editors. Bye then. Gwen Gale 06:29, 1 April ,2007".

In a year after this rant was written Heidi Wyss became one of wikipedia administrators under user name Gwen Gale.

Gwen Gale writing articles about herself

One of the biggest problems with Wyss is that she always has been treating herself differently than others, violating the Golden Rule: "One should treat others as one would like others to treat oneself."

As it is seen from her contributions Wyss was well aware about these policies. She was very active in voting on deletion requests of articles written by others,often claiming that a subject of an article is not notable: "*Delete. Ad, vanity, and doing off-colour versions of covers isn't notable." (the article was kept);*Delete not notable Wyss 18:08, 5 Dec 2004 (UTC) (the article was kept).

Then she herself nominated an article for deletion. She wrote:
Conflict of interest, subject of this biographical article is not of encyclopedic interest meyerj is an SPA who created this article to memorialize his father. The subject is not encyclopedic (a routine military career), not widely noted, the article amounts to original research and its creation raises many COI worries. This article was kept. Two articles that Gwen Gale wrote about herself were deleted. So here we go: the same person claims that Leo J. Meyer, who was one of only three hundred and three men who have been awarded three Combat Infantryman Badges out of more than the twenty-three million, "is not of encyclopedic interest", writes two articles about an absolutely not notable person - herself. The same person who writes two articles about not notable herself sees "many COI worries" with a user writing article about his notable father.

In another striking episode, on October 4, 2008, Gwen Gale accused a user in being Stephanie Adams and in violating Wikipedia:Conflict of interest

Just stop and think about this. This was written by the very same Gwen Gale who wrote two articles about herself!

In this thread Gwen Gale stated:"First, if you are an admin and get involved in a content dispute like this, you cannot use your admin powers to resolve it." It was said on May 16, 2008.

After Gwen Gale yet another time claimed a good faith edit to be "vandalism" administrator HJ Mitchell had this to say about Gwen's conduct:

Gwen also received a personal message about this incident.

Gwen Gale warned the user, but a new user could not have known what "consensus" and "sourcing" means.

Here's an analysis of the situation with this user:
1. A new editor made a few contributions.
2. He is warned he has to use sources.
3. So in his next two edits he tries to use sources.In this edit he provides not just one, but three sources almost for every sentence he adds, but he does it like this "(Marks, "Lost Paradise", page 292.) " because he is not sure what is the right way to list references. In his next and the last edit he inserts the external link to the article in Guardian, which of course is a reliable source.
4. The user is blocked and never returns.

On June2, 2010 a user was blocked with the edit summary: "smells like dirty laundry to me".

I will provide only two example. More examples could be presented by request.

Here is an example of one such conversation about sent email:

What Daedalus969 was doing just before he pinged Gwen Gale? He was commenting on the same AN/I thread that Gwen Gale closed just before she ponged. So as soon as Daedalus969 said "Ping" Gwen gladly responded "Pong".

2. With this edit the user admitted he canvassed Gwen Gale to co-nominate him in his RfA and Gwen Gale responded to canvassing. It is funny that the user made his/her admission in response to admin Guerillero saying that Gwen Gale does not instill any trust in him/her.

Gwen Gale makes a fool of yourself and of Wikipedia

A few days ago professor Timothy Messer-Kruse shared his experience in editing Wikipedia. In particular he recalls part of his exchange with Gwen Gale:"Explain to me, then, how a 'minority' source with facts on its side would ever appear against a wrong 'majority' one?" I asked the Wiki-gatekeeper. He responded, "You're more than welcome to discuss reliable sources here, that's what the talk page is for. However, you might want to have a quick look at Wikipedia's civility policy." The complete conversation is preserved here:

Gwen Gale was also the one who "welcomed" the professor to Wikipedia: "Did you make this edit while not logged in to this account? You may want to have a look at Wikipedia's policy on sockpuppets. Gwen Gale (talk) 18:00, 22 January 2009 (UTC)"

Professor Timothy Messer-Kruse who is a world famous expert on the subject was ordered to review "Wikipedia's civility policy" although he was civil, and "Wikipedia's policy on sockpuppets" simply because he forgot to log in.

Here's a post at Gwen's talk page concerning her involvement in the matter: "Hello. I just want to point out that I recently read an article in the chronicle here: http://chronicle.com/article/The-Undue-Weight-of-Truth-on/130704/ and it describes what amounts to an edit war that you were engaged in. I looked at the page and discussion in question, and it seems to me that you are boorish and a bully. I would like to suggest that you tone down your air of self-righteous authority, in order to encourage a more civil atmosphere on Wikipedia. It's especially ironic that when presented with what seems to be a very civil point by (presumably) the author of the blog, you ignored the substance of his argument and instead groundlessly accused him of being uncivil himself. If you're going to wear that hat of uncontested arbitrator of *TRUTH*, it would be helpful if you at least justified your claims in detail to those who go to the trouble of trying to actually discuss the truth in a balanced fashion using reliable sources. As it stands, you arbitrarily call seemingly reliable sources "unreliable", and other sources that support your preferred narrative "reliable," and this makes you an awful bully. Please consider changing your behavior and attitudes. Best regards. — Preceding unsigned comment added by Ashwinr (talk • contribs) 17:29, 15 February 2012 (UTC)"