Hitori puzzles were first published in Japan by Nikoli and are a logic puzzle similar somewhat to sudoku.

To design a Hitori puzzle we first set the number of squares we want across and down. This is the grid. Then we input the numbers that become the puzzle. We do this manually, as compared to some Hitori puzzles that are computer generated and don't always follow proper technique. In some computer generated puzzles for example, two adjacent squares will be created and is thus a false Hitori.

Here are examples of a grid and a solution to a standard non-symbol Punzhu Puzzles Hitori puzzle: 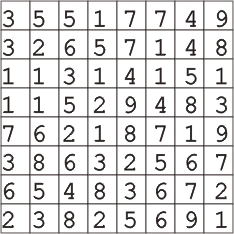 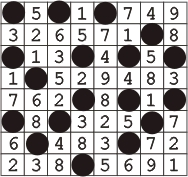 Punzhu makes Hitori, symbol Hitori, and other puzzle magazines available for free downloading when you click on the "Free Puzzle Magazines" link on our main web site or click on one of the puzzle images listed on the home page. Choosing "Free Puzzle Magazines" or one of the puzzle images will take you to the forum download section of Punzhu Puzzles. Registration is NOT required to access our free puzzle magazines. Available for anyone under a Creative Commons licence is our "Various Word Games", which you may download for free from our forum section.