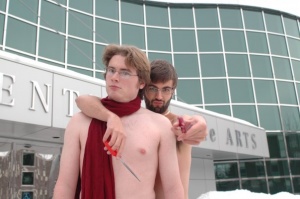 Steve Smith, a law student at the University of New Brunswick and a member of Wikipedia’s Arbitration Committee (Arbcom), made the following acknowledgment on his Wikipedia Talk Page on May 10, 2010:

“Some time ago, I learned that my article work, along with that of other arbitrators, was becoming the subject of scrutiny. In my case, this scrutiny apparently took the form of an automated comparison of some of my articles to the online sources they cited. This analysis was prone to false positives, and indeed the article of mine that it highlighted as a concern - Ken Allred - was one. However, this prompted me to look at some of other early article work, much of it consisting of biographies of municipal councillors of dubious notability, usually for the first time in years. I was shocked by what I found: I had engaged in rampant plagirarism, and in a few cases had even copied content so exactly that I believe that I was violating the source's copyright…. I have trouble putting myself in my 2007 shoes. I was certainly not deliberately plagiarising, but I'm not sure whether I did not notice the extent to which I was copying the source material or whether I did notice but did not see it as problematic; both possibilities seem equally implausible to me, but the question may well be immaterial. My reaction upon discovering this was that I no longer had the moral authority to serve as as arbitrator, and I immediately announced my resignation to the Committee. Since then, I have been persuaded that this is not necessarily the case; I overcame a problem that I didn't realize that I had, and this is now in the relatively distant past.”[1]

Smith did not explain why the article work by the members of the Arbitration Committee had been “under scrutiny,” nor did he identify which members of the committee “persuaded” him to rescind his resignation.

In a statement on Wikipedia Review on May 25, 2010, Smith affirmed that his actions would not be tolerated in a professional publishing environment:

“I think it's obvious that this would make me unsuited for any position of editorial authority in a credible publishing venture. But as somebody commented earlier, even without this I'd never have been given a position of authority in a credible publishing venture, since I don't really have any qualifications. Wikipedia is not a credible publishing venture under any serious definition of the term; I think I've always been pretty open about stating this. It's a giant dysfunctional web community that has somehow produced a very useful collection of articles. ArbCom spends most of its time fighting a losing battle against that dysfunction; am I, on this basis, less suitable for that role than the assorted other folks who might take it on? Very possibly, and I welcome further discussion of the subject.”[2]

There has been no public statement by the Arbitration Committee regarding Smith’s statements regarding his action and the actions by his fellow committee members.