MyWikiBiz is a wiki directory business that at one time created Wikipedia articles for paying corporations. The current site at MyWikiBiz.com allows people and business enterprises to author their own legacy on the Internet, using a semantic web version of the famous MediaWiki software. The MyWikiBiz directory contains over 34,000 pages of content about corporations and individuals. 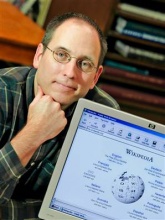