MyWikiBiz has achieved substantial gains in registered users, original articles, and visitor traffic since its re-launch in January 2008. While site traffic is predominantly U.S.-based, there is a global reach, especially into Europe and East Asia.

As with any new website, growing traffic to the site depends on search engine relevance, inbound links from other authoritative sites, and word-of-mouth. Thus far, it is clear that MyWikiBiz is appealing to more and more visitors over time. 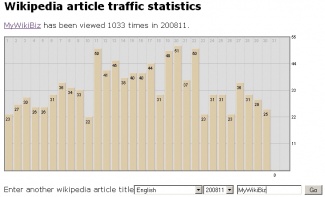