Kershaw Knives was started in Portland, Oregon in 1974 when Knife salesman Pete Kershaw left Gerber Legendary Blades to form his own cutlery company based on his own designs.[1][2][3] Early manufacturing was primarily done in Japan; in 1977, Kershaw became a wholly owned subsidiary of the Japanese KAI Group.[1][3][4] In 1998 the main production facility was opened in Wilsonville, Oregon; due to growth, the facilities were moved to a larger production site in 2003. Current manufacturing facilities are located in Tualatin (main factory) and some goods come from their Japan and China factories.[3]

The current company is named KAI USA Ltd, and has three lines of products; the original Kershaw Knives name, Shun Cutlery, which sells kitchen cutlery,[3] and Zero Tolerance, a new line of combat knives.[5] The Zero Tolerance line represents joint designs between custom knife makers Ken Onion, Tim Galyean, and Strider Knives; a portion of the proceeds from the sale of each knife is donated to the Outdoor Recreation Heritage Fund for the Paralyzed Veterans of America.[5] 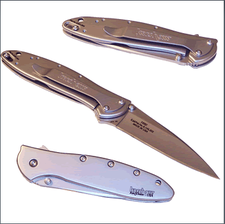 Kershaw Leek designed by Ken Onion. While serving as a US Marine, Onion devised a helicopter mechanism that was adopted for use by the military.[6] In 1989, Ken’s wife, Noel, made arrangements through a friend for Onion to meet custom knife maker, Stanley Fujisaka.[6][7] The two became friends and Onion learned his basic knifemaking skills from Stanley, building his first knife in 1991.[7]

Onion holds 36 design patents on different items including locks, mechanisms, and knife designs.[7][11] Most notable of these is the Speed-safe mechanism used by Kershaw Knives. For these many designs and his work throughout the cutlery industry promoting the art of knife making, Onion was inducted into the Blade Magazine Cutlery Hall of Fame at the 2008 Blade Show in Atlanta, Georgia as the 45th and youngest living member.[7] A recent article in Blade Magazine asserts that some celebrities, such as Steven Seagal, Steven Tyler, Nicolas Cage, Kid Rock, Pamela Anderson, Wayne Newton, Stephen Lefebvre, Wayne LaPierre and Ziggy Marley own custom knives made by Onion. [12][13]