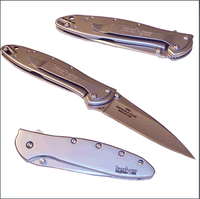 Ken Onion is Kershaw's most famous knife designer. Since joining the Kershaw company in 1998, Ken has won numerous awards for his designs such as his Speed-Safe opening models.[8][9] Shun Cutlery offers knives designed by both Ken Onion and Food Network personality Alton Brown.[10] Kershaw has also collaborated with custom knife makers Grant and Gavin Hawk, Frank Centofante, and Ernest Emerson.