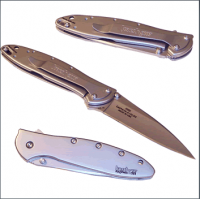 Kershaw Knives formally began in 1974 when Knife salesman Pete Kershaw left Gerber Legendary Blades to form his own cutlery company based on his own unique designs.[2][3][4] Early manufacturing was primarily done in Japan; in 1977, Kershaw became a wholly owned subsidiary of the Japanese KAI Group.[2][4][5] In 1998 the main production facility was opened in Wilsonville, Oregon; due to growth, the facilities were moved to a larger production site in 2003. Current manufacturing facilities are located in Tualatin (main factory) and some goods come from their Japan and China factories.[4]

The current company is officially named KAI USA Ltd, and has three lines of products including the original Kershaw Knives name, Shun Cutlery, which sells kitchen cutlery,[4] and Zero Tolerance, a new line of combat knives.[6] The Zero Tolerance line represents joint designs between custom knife makers Ken Onion, Tim Galyean, and Strider Knives; a portion of the proceeds from the sale of each knife is donated to the Outdoor Recreation Heritage Fund for the Paralyzed Veterans of America.[6]