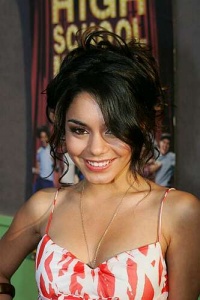 Vanessa Anne Hudgens was born on December 14, 1988 in Salinas, California, USA. She has a younger sister named Stella. When she was still young, her family moved to San Diego, California. She began her love of music and theater as a young child, in fact both sets of grandparents were musicians during the Big Band Era of the early part of the last century.

She began doing commercials and if other internet sources are correct - she received her first job when a friend could not go and she went in her place. She even began doing some modeling and even appeared on the cover of San Diego magazine. She made her first television appearance in 2002 in an episode of the TV series Still Standing. This was followed up by another small TV appearance on an episode of Robbery Homicide Division later that year. She was no stranger to acting and has had a number of theatrical roles including: The Wizard of Oz, How the Grinch Stole Christmas, The King and I, Evita, Carousel, Dam Yankees and Cinderella.

Her first real role came only one year later, when in 2003 when she made her big screen debut in role of Noel in the movie Thirteen. In 2004, she hit the big screen again as Tin-tin in the mildly successful sci-fi comedy/drama Thunderbirds. She continued with her pursuit of an acting career and appeared in an episode of Quintuplets in 2005. Her big break came in January 2006, when she appeared as Gabriella Montez in the Disney made for TV movie High School Musical opposite Zac Efron. The movie did very well in the ratings for its demographics, but to everyone's delight, the music from the soundtrack has made a big splash on the U.S. charts. In fact, the single "Breaking Free" - a duo she sings with Zac Efron has reached #4 on Billboard and made history when it dropped 82 places from #86 one week earlier - the largest single jump ever! She continues to sing and act and has recently (2/06) appeared on an episode of The Suite Life of Zack and Cody.