MyWikiBiz, Author Your Legacy — Wednesday May 18, 2022
Jump to navigationJump to search

Link to the actual article (this is a work page) is here: KorculaDialect

A large proportion of information (books,articles) concerning the former Yugoslavia reminded me of the Yugoslavian encyclopaedias of the 1970s. The encyclopaedias were written in the same style as the Great Soviet Encyclopaedia.

The Croatian language has been changed by the modern language Serbo-Croatian (it was created in the 19th century/a constructed language). Additionally Slavitization of non Slavic regions (people in the new Yugoslavia ) was being carried out. These were the government polices of the Kingdom of Yugoslavia and the Communist Party of Yugoslavia.

Information was and still is being presented to the world. An historical perspective of former communist Yugoslavia that was written by a Totalitarian political system.

This is interesting history

Translating from Croatian to Serbian

Serbian writers were translating from Croatian to Serbian until the 19th century:

These songs... some are written in Herzegovinian dialect, the others are in dialect of Srijem... written all in Herzegovinian (some ijekavian examples), people of Srijem (Serbs who moved to Srijem from Raška at the end of the 17th century) would say: why is he giving us Croatian language? 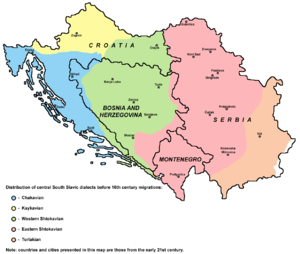 Western Balkans Slavic dialects (or languages) historical distribution in the 16 century. Blue is Chakavian whist green is West Shokavian and pink is East Shokavian. (Map by Panonian)
Retrieved from "https://mywikibiz.com/index.php?title=Talk:Korcula_Dialect&oldid=466213"