Here's a selection of some actual cases of random Internet users finding their way to a page on this site.

On the evening of October 26, 2009, we caught Jim Cramer on CNBC's Mad Money, ranting about the frequency of use of the phrase "albeit at lower levels" in earnings reports.

As a lark, we created a page on MyWikiBiz about the phrase. About 18 hours later, it became the #1 result on Google when searching for the phrase in quotes (out of 632,000 hits); and it was #3 when leaving out the quotation marks (out of 2,730,000 hits). (Note: As of December 2009, however, the page has receded off the top page of Google search results.)

The question is, what would happen if someone made a page about this phrase on Wikipedia? First, would the page get deleted? Second, if not, would it outrank the MyWikiBiz page, and how quickly?

As of late July 2008, MyWikiBiz's semantic wiki is about a half-year old with a Google PageRank of 3/10, while Wikipedia's plain wiki is 90 months old and has a PageRank of 9/10.

We're already discovering that on certain searches, though, MyWikiBiz has the potential to beat Wikipedia: 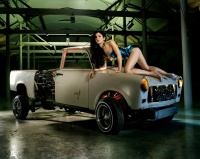 Consider the search terms Liz Cohen born Phoenix. In a Google search, we found Liz Cohen's MyWikiBiz page perched at result #2, while Wikipedia's page about her came in as result #7.

The situation on a Yahoo! search was even better -- MyWikiBiz comes in as the #1 result. Wikipedia is not even found in the first 100 page results, except for false positives on articles about Freddie Mercury and Tanya Donelly.

What is Wikipedia's problem? We surmise that because Wikipedia frowns on (in fact, it forbids) the subject of articles adding "sticky" content (like videos, sound clips, images, advertising, and those all-important semantic tags) to their pages, the big encyclopedia actually loses the search engine race when the topic is a less-notable subject.

Examples from our past (on Centiare.com)

Here's an example we noticed in December 2006: 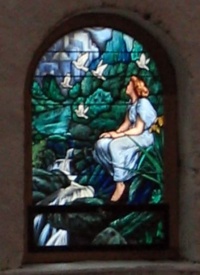 The Church of the Loving Shepherd is located in West Chester, PA. Assume that you were driving by the church one day, but you only caught a glimpse of the church's full name. Later that day, you might search Google using a pretty common method: entering city + name fragments, which in this case might be the stream-of-thought keyword phrase West Chester church shepherd (because that's all you remembered from your drive-by observation). Click the following link to see the actual result you would get on Google:

See how the semantic tags recorded in the Church's MyWikiBiz Directory listing improve not only Google's search term relevance, but also trigger the correct address and contact information to be displayed?

In addition to context and relevance, semantic tags also improve overall rankings through the effect of MyWikiBiz's internal cross-linking. That is, the combination of MyWikiBiz listings, automatically-generated summary reports (at the end of each listing), cross-referenced ASK queries, and (probably) our tolerance of Google AdSense ads, all serve to improve overall search rankings by providing multiple reference points.

Additional proof of these search engine optimization (SEO) results can be found by trying these search queries at Google:

The stone crab article in MyWikiBiz took its author about 10 minutes to create, and it now comes up first out of 126,000 Google search results -- even higher than Wikipedia's article about stone crabs. Imagine what careful, dedicated authors of encyclopedic content on MyWikiBiz could achieve.

At the end of the first week of January 2007, MyWikiBiz developers created two new "test cases" to explore the dynamic impact of MyWikiBiz on Google search engine rankings for small businesses. We selected two real-life businesses in competitive trades -- plumbing and real estate -- and settled on Superior Plumbing & Heating of Rochester, Minnesota, and Pinnacle Realty Services of New Bedford, Massachusetts.

We drew up what we thought might be some common search engine queries that potential customers of these businesses might input on Google. We checked where each of the companies' own web sites (Superior and Pinnacle) emerged on these hypothetical Google searches. Then, we created MyWikiBiz Directory pages for each company, including no more data or information than could be derived from these companies' existing web sites. Finally, we waited a little more than a month for Google's spiders to crawl MyWikiBiz and appropriately rank these new Directory pages.

Honestly, some of the results were enticingly good, while others were a bit of a disappointment for our very high expectations. Here is the data from the Superior Plumbing & Heating test:

And here is the data from the Pinnacle Realty Services test:

As one can see from these tables, MyWikiBiz (even in its formative stages of content-building) has the capability of giving small businesses another "chance" within Google searches to be found by prospective customers. This is especially true if one carefully targets some highly-specialized searches that might be taking place (as in the "se habla espanol" example). Why would Pinnacle Realty Services settle for a 15th-place ranking of their home page on that search, when they could achieve a 2nd place ranking with an equivalent MyWikiBiz listing?