Launched in 2006, the MyWikiBiz enterprise has authored dozens of encyclopedic articles about companies, products, and individual persons. These articles are published under terms of free, copyleft licenses, in hopes that free content sites (primarily Wikipedia) will disseminate them to vast audiences for wider use.

What about the other seven articles that were not disclosed? All are beautifully residing to this day within Wikipedia, thoughtfully tended to by the editing community. To them, MyWikiBiz has added at least 25 more articles and article improvements on behalf of clients. Only two or three have ever been overturned by the Wikipedia administrative community.

Wikipedia's guideline about paying someone to make edits on your behalf states:

...If you expect to derive monetary or other benefits or considerations from editing Wikipedia, then you are very strongly encouraged to avoid editing Wikipedia in areas where there is a conflict of interest that may make your edits non-neutral (biased).

That sounds clear and fair enough, but what they don't tell you is that biased and subjective administrators are generally the ones who will make the determination whether your edits are "non-neutral". If you're reading this page, there's a good chance you already know exactly what we're talking about here.

Despite a superficial "permanent ban" from Wikipedia, MyWikiBiz and its affiliates (all under signed non-disclosure agreements) have researched, written, and published on Wikipedia numerous paid articles, throughout 2007, 2008, 2009, 2010, and currently in 2011. The vindictive administrators on Wikipedia think they have the power to control free content, but in practice they have nothing of the sort. By using sockpuppet editor accounts that are dedicated to only one client, and by using cycled IP addresses, public Wi-Fi hotspots, and mobile Internet connections, Wikipedia articles can be written and published in exchange for payment, without retribution -- even despite a community "ban" on editing Wikipedia in this fashion. It can be done, folks. You simply can't ever breathe a word of it. That's the secret.

Most projects with clients are executed for less than $150. 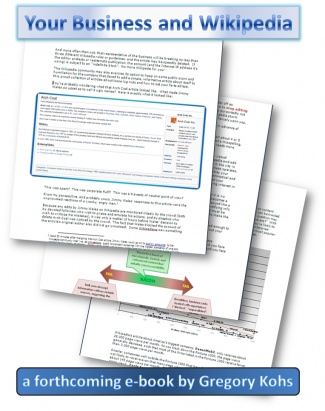 Your Business and Wikipedia is a forthcoming e-book to be published in 2011, by Gregory Kohs. With over four years of experience as a Wikipedia editor, news maker, and spokesman, Kohs understands the ins and outs of creating, modifying, and manipulating Wikipedia content to better serve the needs of your business. And soon he'll be sharing his astounding and provocative secrets with you.

Gregory Kohs is a marketing research director for a Fortune 100 media company. His enterprise, MyWikiBiz, has been the subject of news stories appearing in USA Today, the Washington Post, and MSNBC.com. He has appeared on national television and has presented "how to" information about Wikipedia to academic audiences. His experience with MyWikiBiz and Wikipedia has been documented in numerous books and scholarly works. Having been consulted and hired by dozens of clients to work on content within Wikipedia, Kohs is perfectly suited to teach you about Your Business and Wikipedia.