This article in Centiare Directory space was copied from Wikipedia, as a temporary demonstration. This article will either be replaced by its rightful legal owners, or removed as other Directory listings are authored from scratch and can serve as basic demonstration examples. If you wish to edit this article under the provisions of the GFDL, please contact the Centiare administrator for access.

Because of its land-use policies, Huntington Beach has the largest ratio of park area to person of any city in the United States. Template:Fix Almost all schools have playing fields arranged for public access as parks, with park-like amenities near major streets, and schools near the centers of blocks. Since Huntington Beach contains a major power generating station, the high-voltage rights-of-way are numerous, and have also been zoned as parks with walkways. 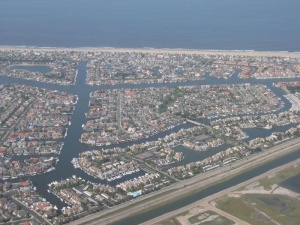 The city often ranks among the top 10 safest cities for its size in terms of crime Template:Fix, and in the top 30 of all safest U.S. cities in 2006 per the Morgan Quitno Press (based on FBI figures).

Huntington Beach is also one of the most emergency-prone settled areas on the West Coast of the United States. Template:Fix This is a direct result of its attractive geographic features. The beach was naturally constructed by the Santa Ana River's delta. Some settled areas of Huntington Beach lie within the 100-year and 50-year flood zone. Some parts of the delta require powered pumping to remove water during heavy rains. Some parts do not drain effectively at all, and in these areas, local flooding is common during heavy rain (although this threat is remote and poses no danger to human life).

The city's Emergency Operations Coordinator has said that, in a nuclear war, the city would probably be severely damaged in a first-strike against military targets. Template:Fix Because Huntington Beach adjoins Naval Weapons Station Seal Beach, and the center stores munitions (widely believed to include nuclear weapons), the Center is likely to be first-strike target for ground-burst thermonuclear weapons. Huntington Beach also includes a very large Boeing installation, which is an attractive strategic target.